Skip to content
Home Babies Girl with Down syndrome survives new heart surgery, ‘She’s one of the first to have it’ “‘She will be fine!’ How many times have you heard that or maybe even told that to someone when they are going to have surgery? ‘You’ll be fine! Surgeons do this every day.’

‘ My aunt’s cousin has a friend whose daughter had a 𝑏𝑎𝑏𝑦 who needs surgery and he is fine now. She will be fine!’

‘But what if she isn’t?’ That has been the thought that has lodged itself in the back of my mind for two years. Every six weeks or so, Ariel’s life is extended by another six weeks when she gets checked by her cardiologist. Telling someone or even myself she will be fine is almost willing it into the universe, like ‘Hey universe, this is how it is going to be, okay?’ I feel like special-needs moms do that a lot. 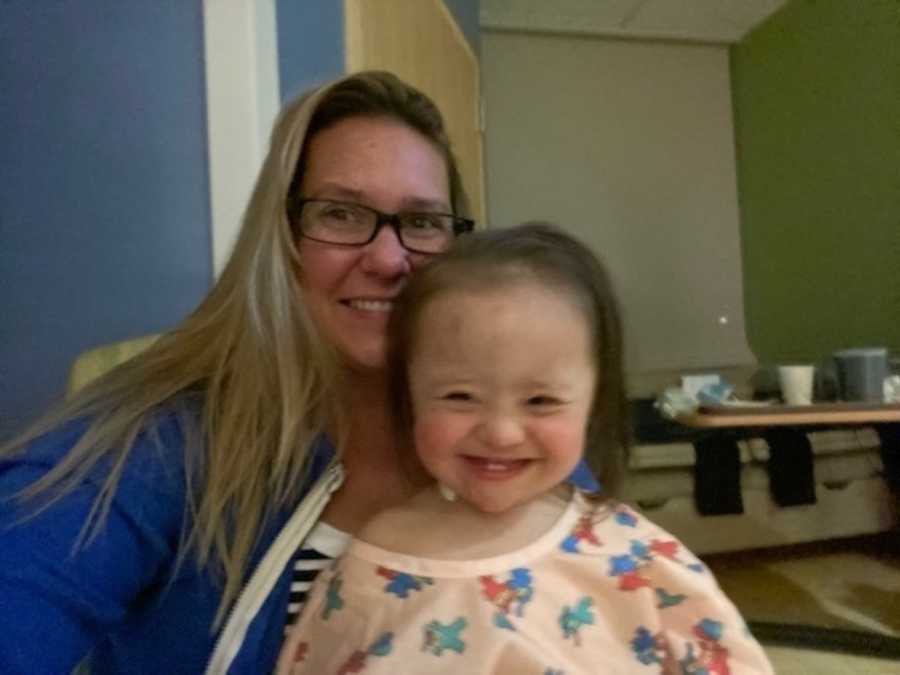 Ariel has an atrial septal defect and ventricular septal defect that needed repair. All these holes in the heart for common in individuals who have Down syndrome. The type of surgery she needed was groundbreaking technology. She is one of the first people in North America and the first on the West Coast to receive it. So reassuring myself they do these every day isn’t quite applicable.

The evening before her surgery, we said goodbye to Katalina, her twin sister. She was going to stay with her grandma and grandpa for the week. The house was strangely quiet with only one 𝑏𝑎𝑏𝑦 but Ariel was loving all the extra attention. We settled down and I coveted all the snuggles I could. She fell asleep on my chest and I memorized the sound and rhythm of her breathing. I counted every eyelash that was perfectly placed on her almond-shaped eyes. She was sleeping so peacefully but my mind was racing. Is this the right decision? How will I manage her recovery? If they cut her ribs, can I devote myself so they heal correctly? How will I manage her twin? Will her scar embarrass or define her? Will Katalina miss Ariel? The most important of all, will she survive this? 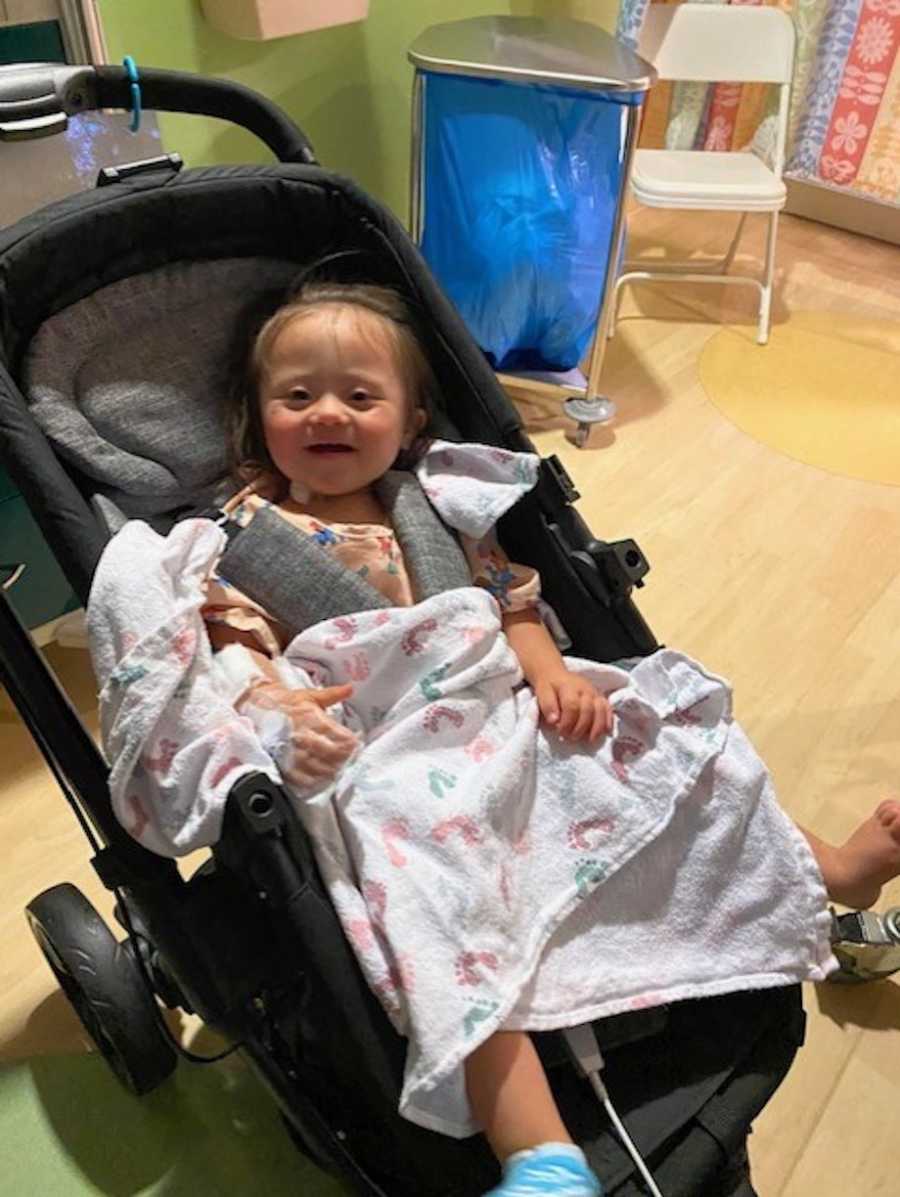 We were up early the next morning at the hospital at 5 a.m. Ariel, of course, was in a great mood and I kept taking her picture, scared it could be the last one I had of her. I feel guilty that if something happened to her, it would be my fault. We checked into the hospital and I was just ready for this to be over. I felt like our life was somewhat on hold and real-life could begin once the surgery was behind us. The clock felt like it stopped and we were prolonging the anxiety. The next thing I knew, they came to take Ariel back to the operating room. I didn’t want to let her go because then the decision would be final. She already had her negative COVID test and blood work completed. All x-rays were looking great. I had to let her go.

She went willingly to her new friends and the nurses fought over who was going to hold her. Ariel is always the charmer, even headed to heart surgery. I stood there, paralyzed, and watched her smiling face until she disappeared behind the doors. Her dad and I went across the street for some breakfast and then back to a private waiting room. We were the only ones allowed in there due to COVID and we were grateful we could both be in there together. I sat there with a knot in my stomach. The nurse would call my cell phone periodically and each time the phone rang, there was a debilitating fear. The nursing team was fantastic about updates. The prep for surgery and getting her set up in the recovery room took longer than the surgery itself. Surgery was about five hours and I snuggled in the waiting room with her crocheted blanket the hospital gave to her. Finally, the nurse came in and shared her surgery was successful. 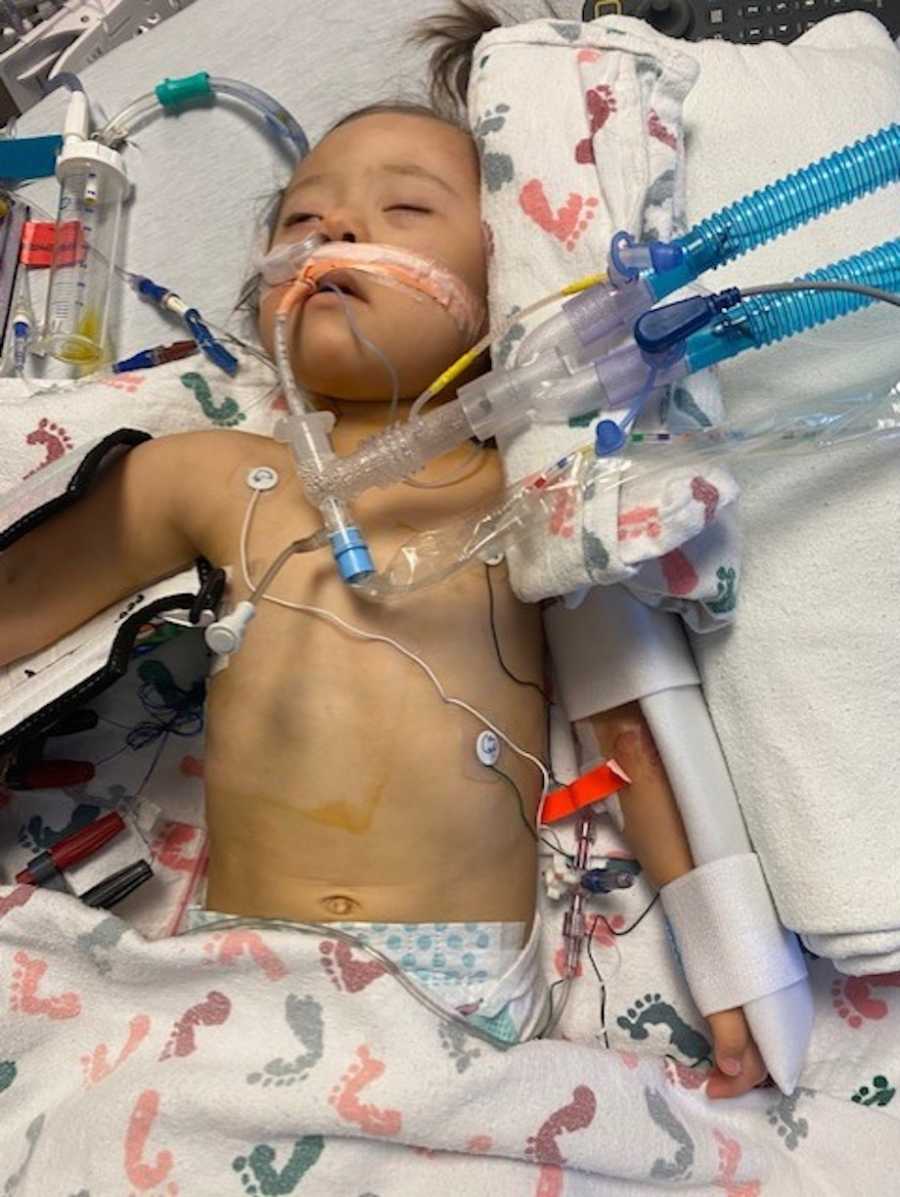 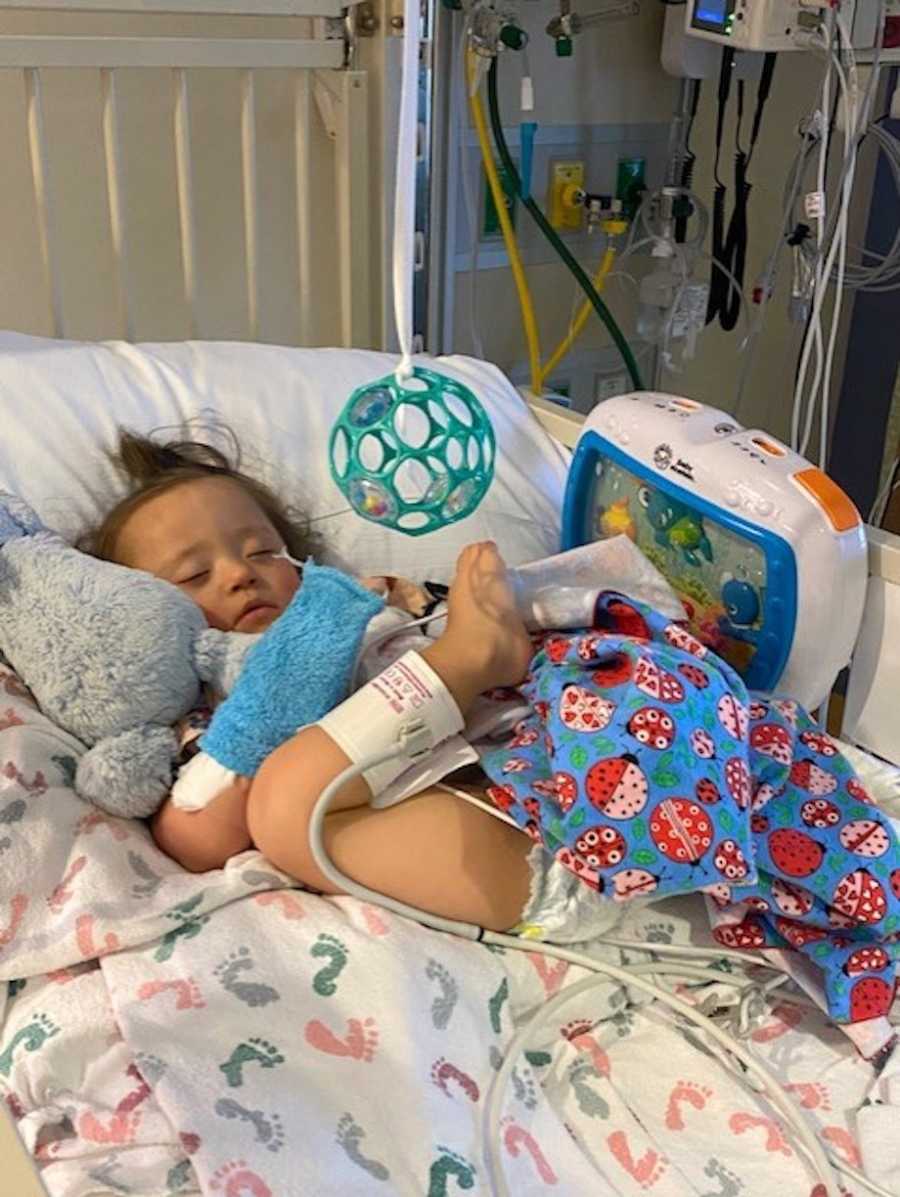 The fog holding me down lifted and I was so happy! I couldn’t wait to see her. She was still sedated and hooked up to what seemed like hundreds of machines. There were wires everywhere but she did amazing. I told her how good she did and she was such a warrior. Her dad rubbed her hand and then we were kindly advised to go home so they could provide the best care they could for her. I was sad to leave her but I understood. I was worried she would be scared without me for the night. 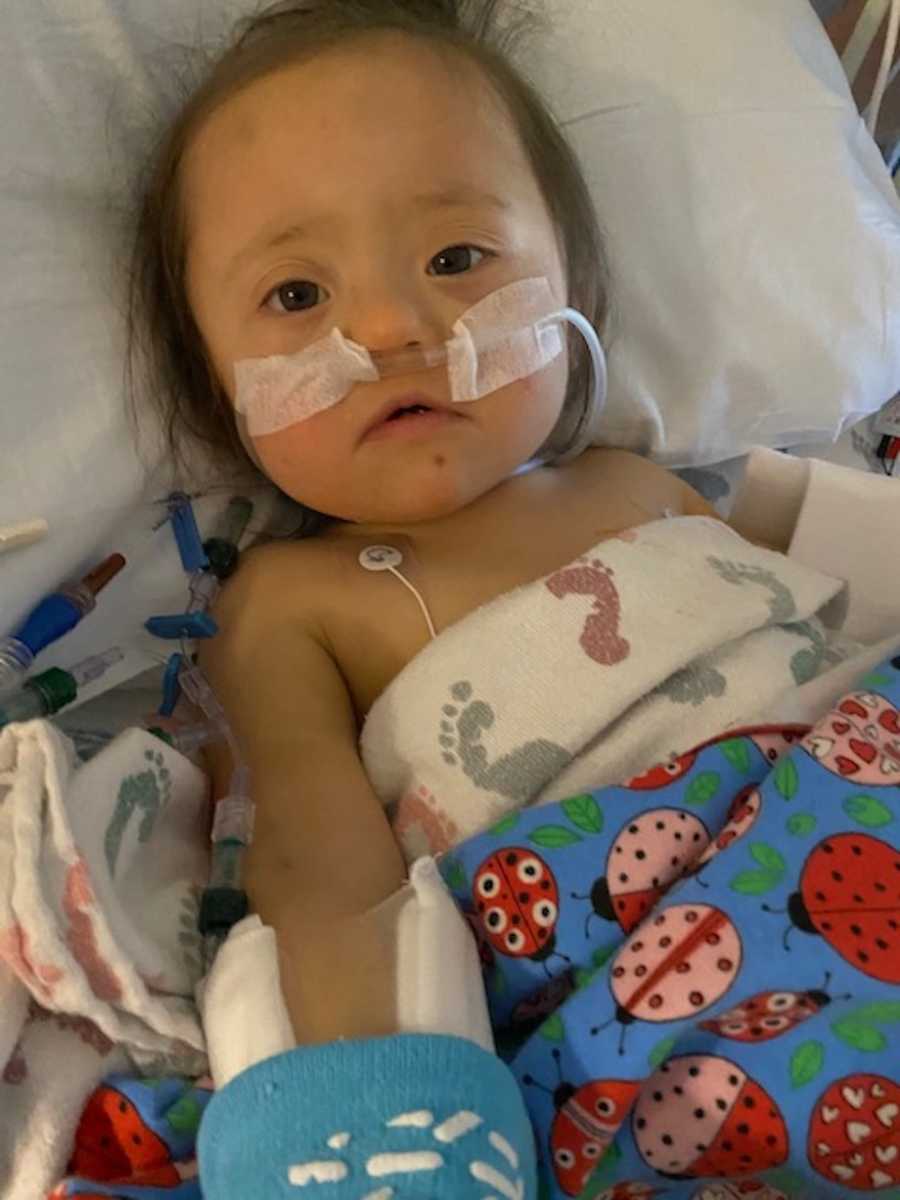 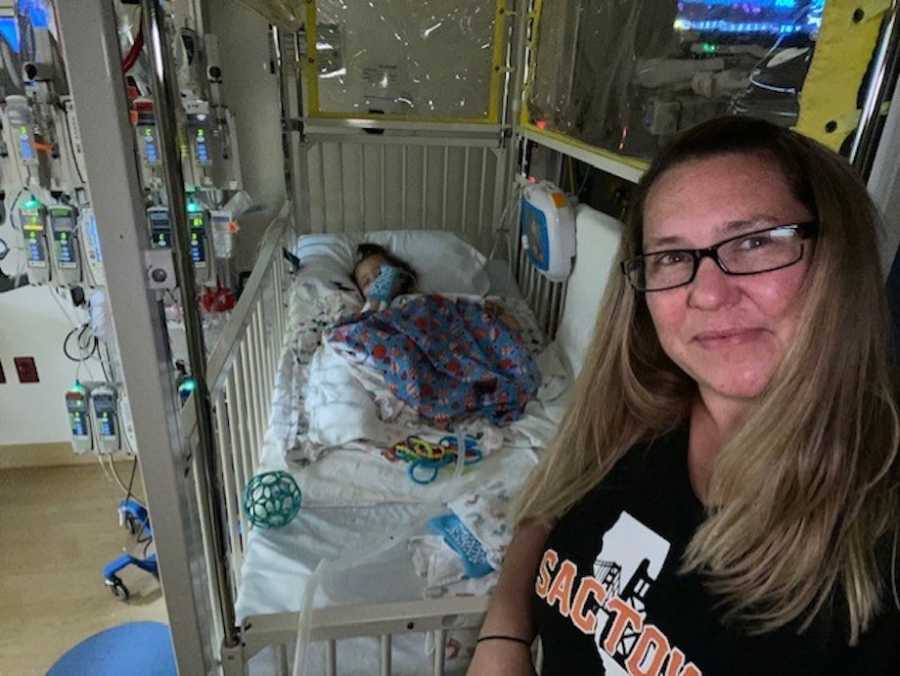 Ariel was the first person on the West Coast to have this new surgery. The surgeons repaired her AV Canal defect through her right side under her arm, which is called a right mini-thoracotomy approach. Typically, it is through sternotomy through the chest. This procedure is specific to Sutter Hospital Downtown. Not only is the scarring minimal but the recovery is faster, as the ribs did not have to be cut. Ariel had spacers put in between her ribs and her right lung was deflated. The surgeons then repaired her heart. Typically, patients have to stay in the hospital a week or longer and Ariel was only there for four nights. The nursing staff all knew her and she got to go for a stroller rides up and down the hall. They would come in to visit her just to see her smile, even if they weren’t assigned to her room. 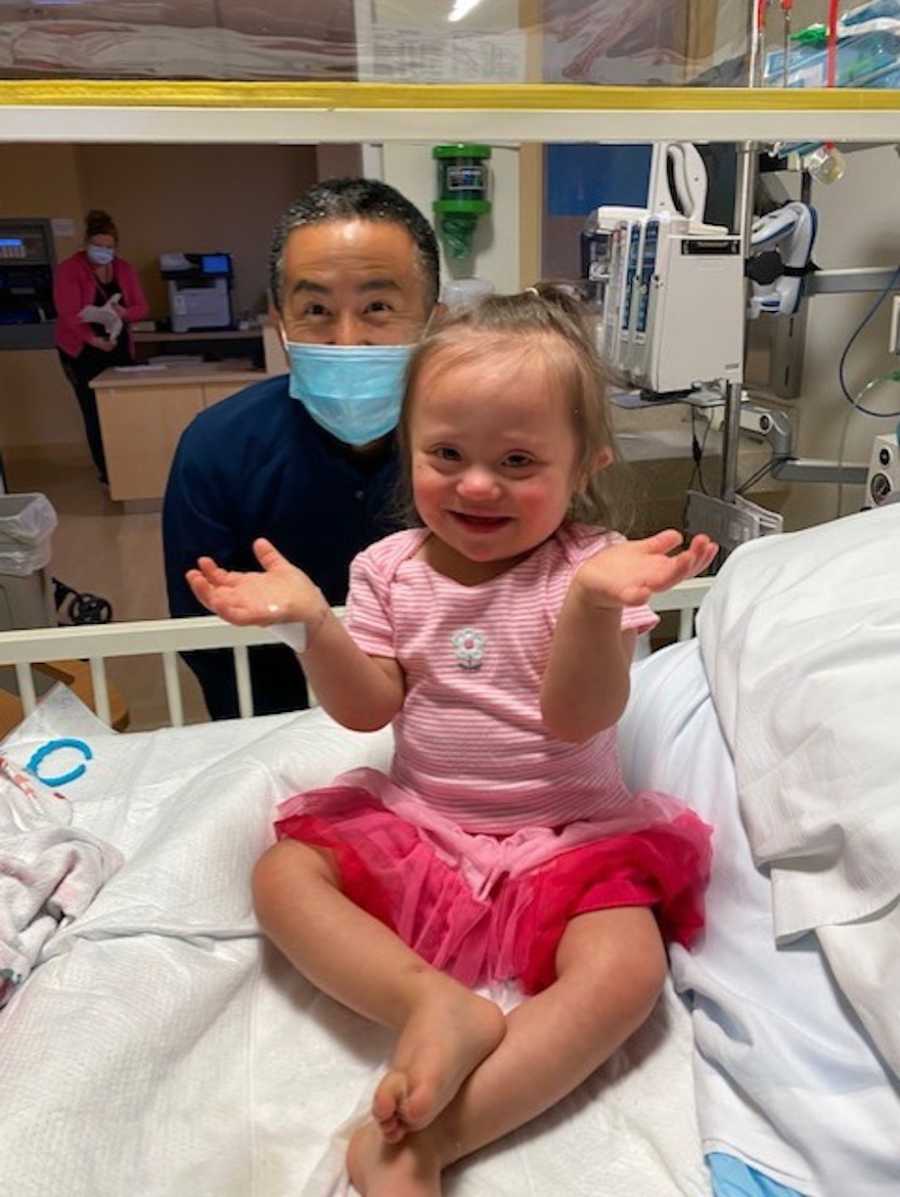 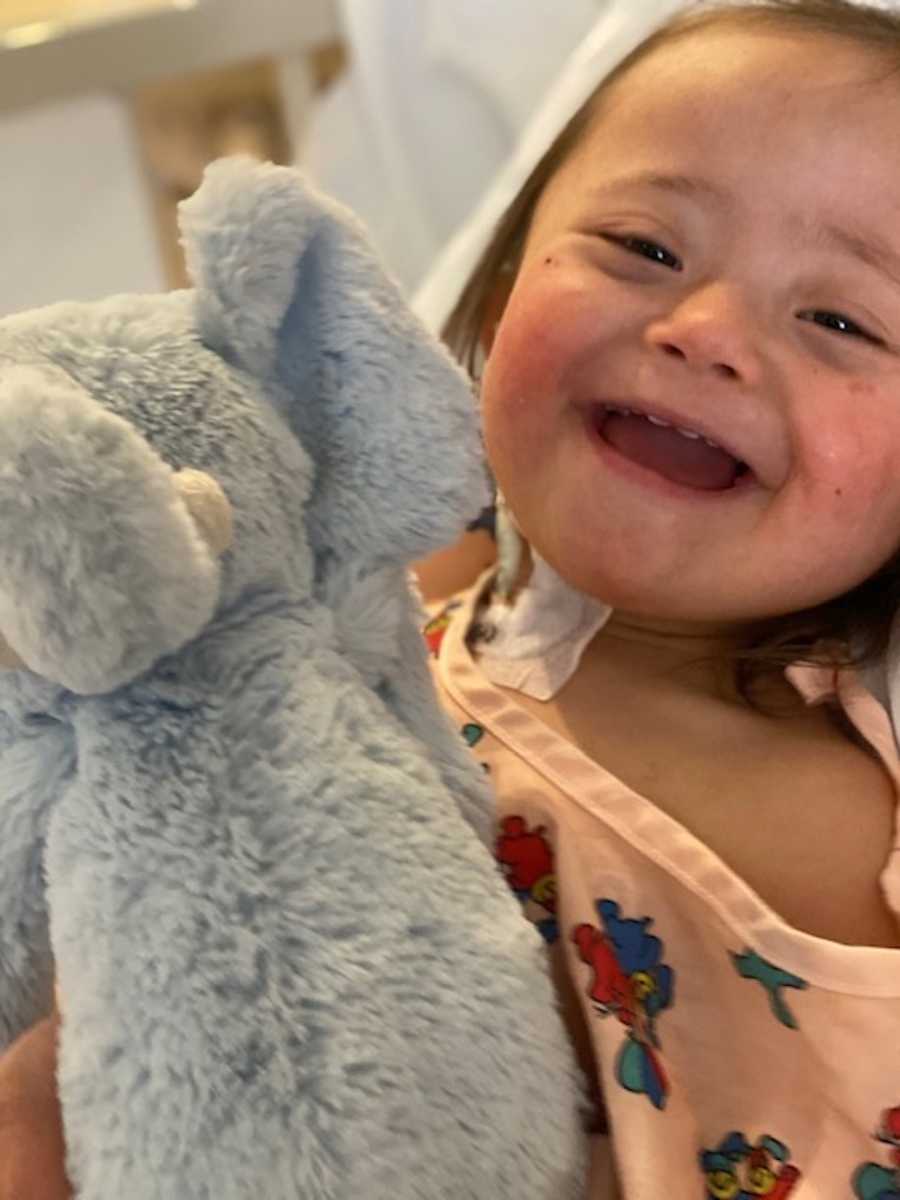 Ariel didn’t even cry when the pacemaker wires were removed. She had a chest tube that was quite large and only yelled when that was removed because she was annoyed for having to stay on her side while they did it. Once those two items were removed, so was her sedation medication. I think one of the nurses gave her a shot of espresso because she had so much energy! She would stand up in her crib and shake it like a caged animal until someone played with her. 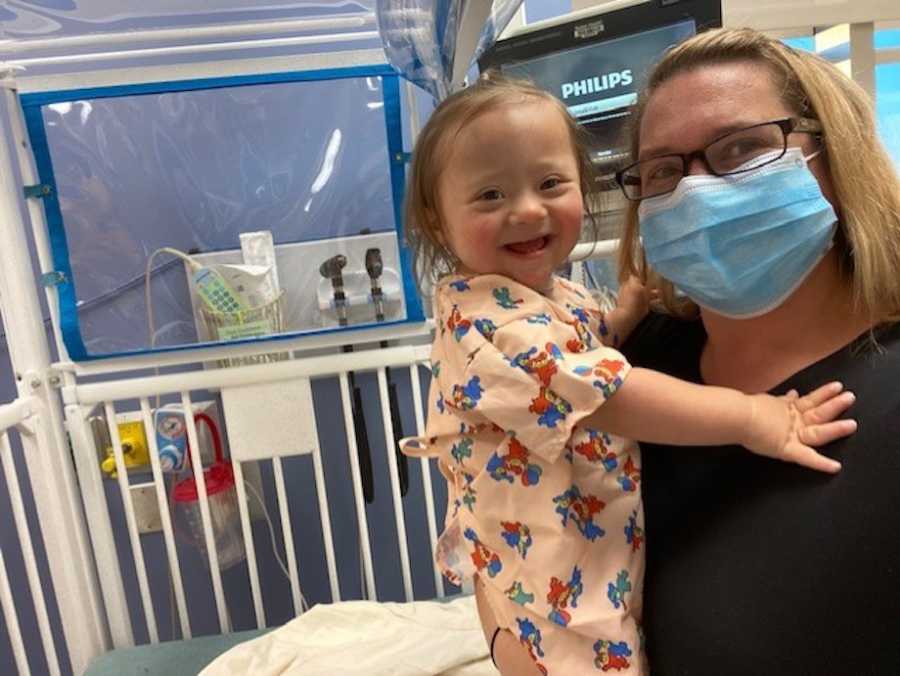 Due to COVID, her dad and I had to take turns visiting with Ariel. It actually worked out well because we both got some needed one on one time with her. We FaceTimed once with her twin, Katalina. No one could come to see her either so she had lots of FaceTime calls with family and friends. Once Ariel was mobile again, she wanted to come home. Katalina had been with her grandparents for a week and got a little teary-eyed and emotional when she got to come home and see her twin. Katalina was so gentle with Ariel for a few days and then started to want to wrestle soon after that. The first time Ariel got to see Katalina, she had the biggest smile on her face! 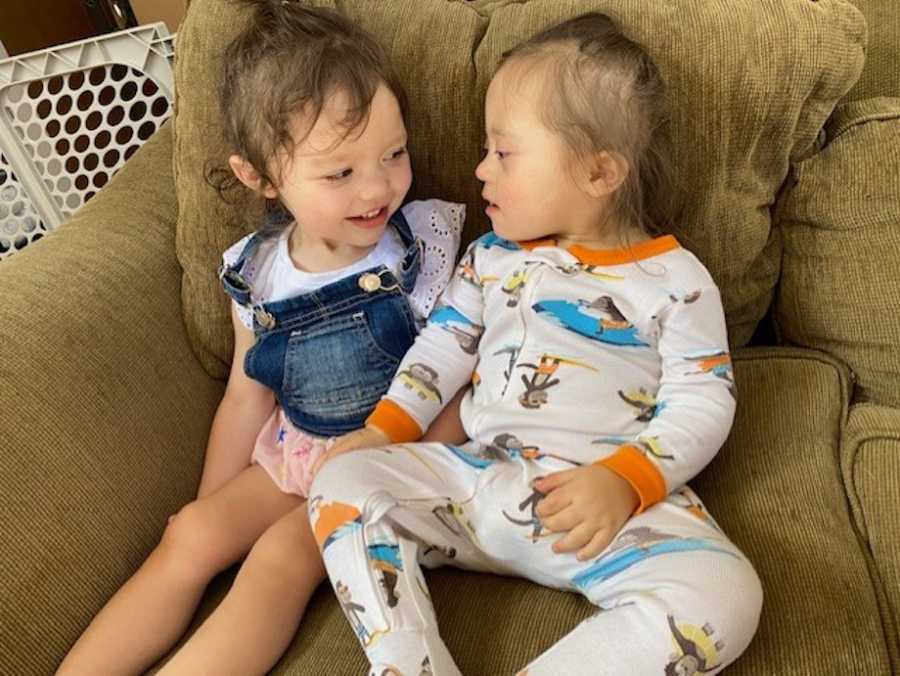 Two weeks after surgery, Ariel shot a modeling job for a toy catalog for a major retailer that will be coming out this Christmas. No one even knew she had surgery. Not only is she an advocate for Down syndrome but she is now an advocate for CHD awareness in the media. Our friends and family and even some of her Instagram supporters helped fill up a meal train for us, which allowed us to be able to focus on her recovery. Post-surgery, Ariel’s sleep apnea has started being more prevalent. Ariel has started to be more clingy and cries when I leave the room. Her right lung is still working on inflating itself, but that is to be expected. I mentioned Ariel’s changed behavior to one of her therapists and it has been determined she has some PTSD from her hospital stay. Usually, these things will go away on their own but for now, we are giving Ariel all the cuddles and sleepless nights she needs. Her story will be aired on ABC News and the hope is to promote what are surgeons are doing in Sacramento by improving these kids’ lives. It truly is amazing.” 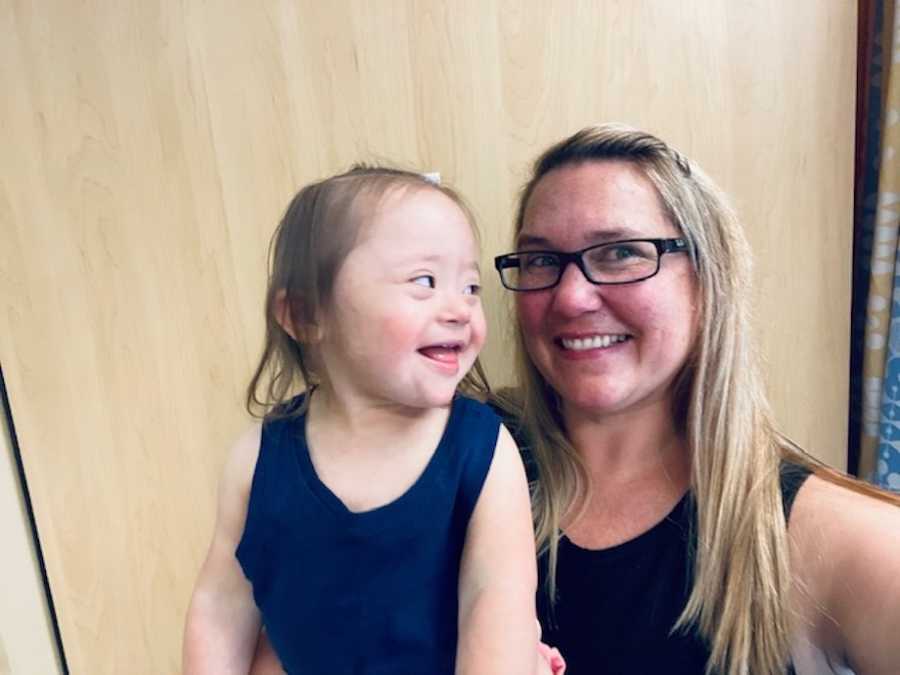 This story was submitted to Love What Matters by Kristal Hernandez. You can follow their journey on Instagram. Do you have a similar experience? We’d like to hear your important journey. Submit your own story here. Be sure to subscribe to our free email newsletter for our best stories, and YouTube for our best videos.

‘It’s a girl, but they saw something.’ I was told, ‘You only have a week to decide.’ I saw her and my heart dropped.’: Mom to daughter with Down syndrome adopts 𝑏𝑎𝑏𝑦 with special needs, ‘Our girls make our family better’

‘We found our phones with several missed calls, texts. ‘Congratulations! You’ve been matched with a 𝑏𝑎𝑏𝑦 boy…’ We immediately melted into tears.’: Couple adopt 𝑏𝑎𝑏𝑦 with Down syndrome, ‘He was absolutely worth the wait’

‘My principal said, ‘I’m adding a boy to your class. He’s from foster care and has Down syndrome.’ I felt this tug on my heart. ‘I want to take him home.’: Single mom, kindergarten teacher adopts down syndrome student

Do you know someone who could benefit from reading this? SHARE this story on Facebook with family and friends.

485 Shares Tweet Email acts of kindness, chd awareness, Compassion, Down syndrome, Down syndrome mom, heart defect, heart surgery, Kindness, love, Love What Matters, model, mother, motherhood, special needs, special needs mom, surgery, thoracotomy, VSD ‘My left foot hurts!’ He was so hot, his temperature was 103.6. But he’s so healthy. How could this happen? He’s only 4.’: Mom of Leukemia Warrior says, ‘I admire his spirit’‘It’s probably stress.’ My newly retired parents became full time caregivers. Waking up was worse than my nightmares.’: Man with chronic illness turns life around, ‘I turned pain into purpose’ A 𝑏𝑎𝑏𝑦’s cry ʀᴇsᴏᴜɴᴅᴇᴅ in a small American island town after a long time. The first 𝑏𝑎𝑏𝑦 in 93 years was 𝐛𝐨𝐫𝐧 on Little Cranberry Island, Maine,…