Skip to content
Home News Jumping For Joy, The Rescued Horses: Ken And Bruce Look A Picture Of Health After Being Nursed Back To Full Fitness At Sanctuary Neglected, hungry and in p.ai.n, the two horses were a pitiful sight when they were dumped near a country road.

One, an adult, had a tail so long he trod on it when he walked. His feet were a matted, heavy mess of muddy hair, and his hooves so overgrown and misshapen it made every faltering step a.g.o.ny. There was also bl.o.od on his muzzle from a cut near his lip.

The other, a foal, was so malnourished he did not even know what horse food was. You could see his ribs and spine, and he was so weak he wobbled when he walked.

Both had been so unloved by their cr.u.el former owner, who it is thought had be.at.en them too, that they were te.rrif.ied of any human contact. 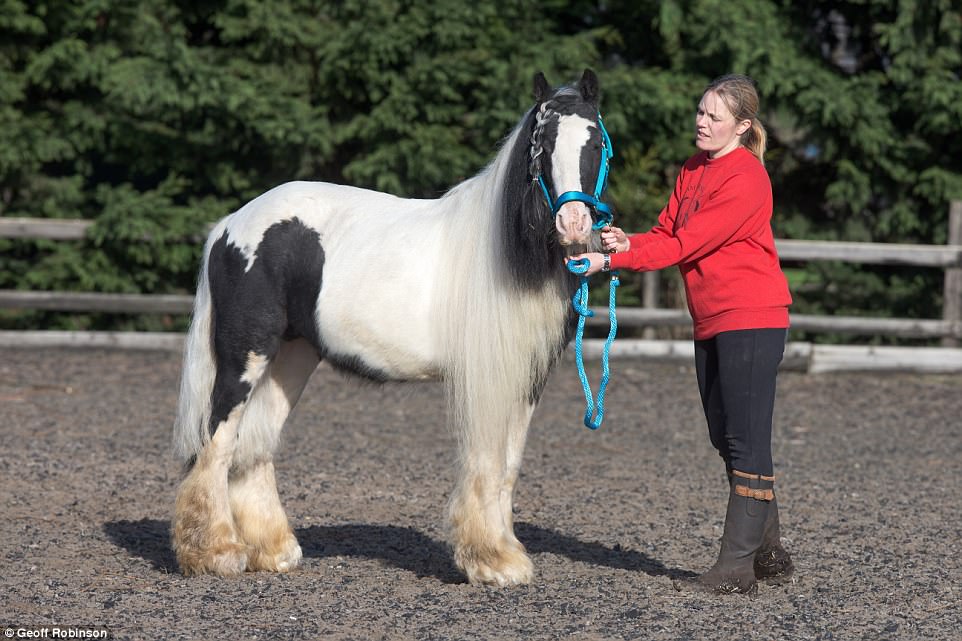 Cantering in their paddock, these black and white horses look a picture of health. But six weeks ago, it was a different story 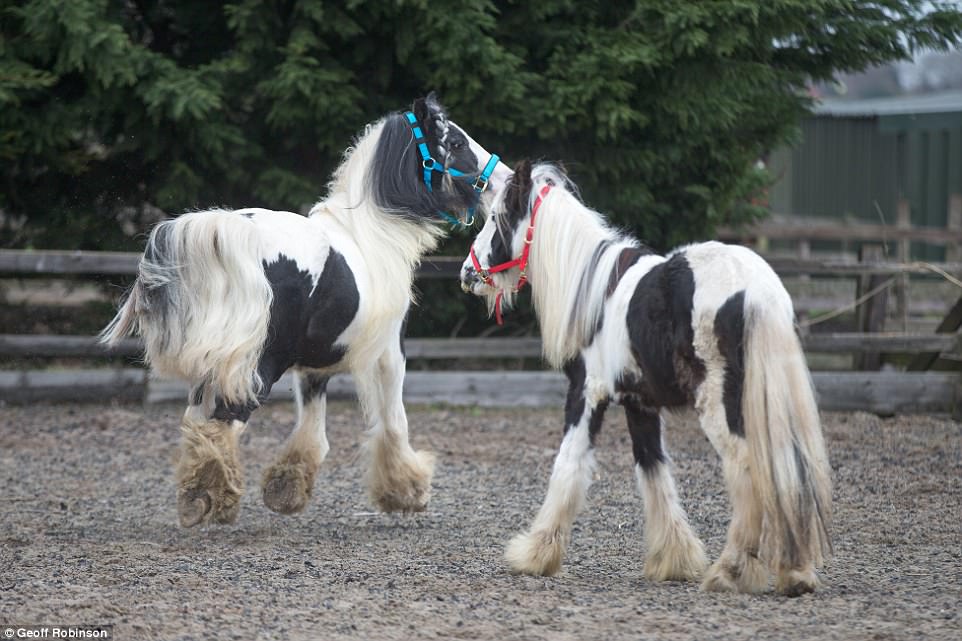 The piebald cobs were in a pitiful state when they were dumped by a road, with fears that they may not survive 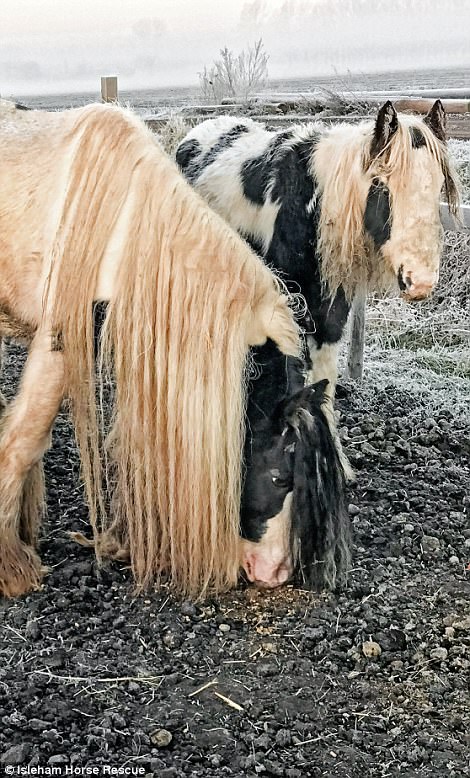 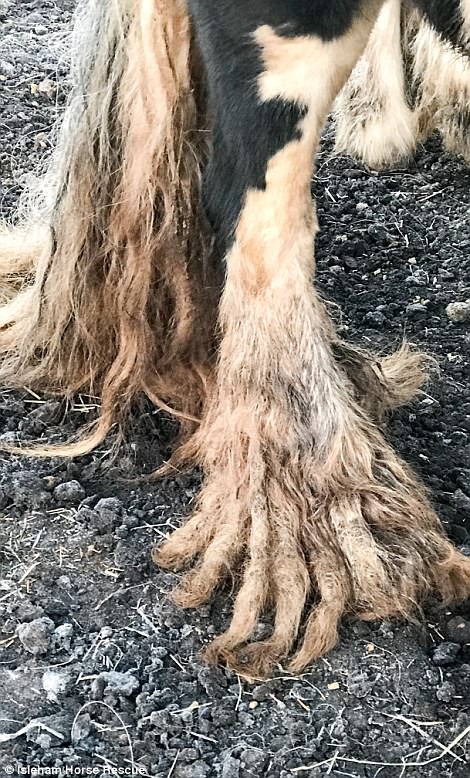 One, an adult, had a tail so long he trod on it when he walked. His feet (right) were a matted, heavy mess of muddy hair, and his hooves so overgrown and misshapen it made every faltering step ag.on.y 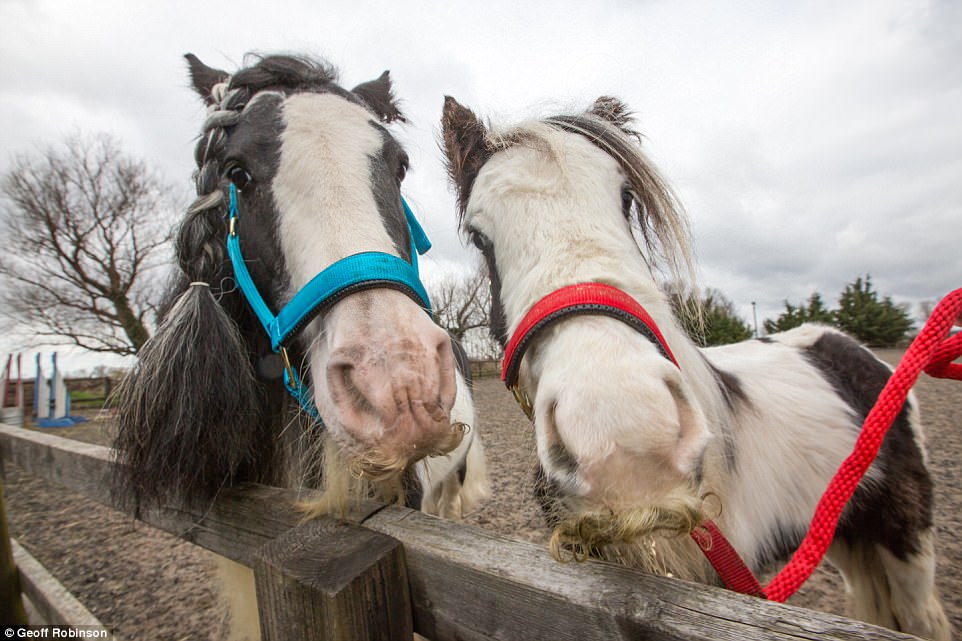 Bruce (pictured right), a foal, was so malnourished his ribs and spine were visible and he wobbled as he walked

But at least the spot where they were abandoned under cover of darkness offered a glimmer of hope. It was near the entrance to the Isleham Horse and Pony Rescue Centre near Ely, Cambridgeshire, whose founder was soon on the case.

Phoned at 9.30pm by a woman who thought two of the sanctuary’s charges may have wandered off, Wendy Davies, 67, and two volunteers managed to guide the horses to the safety of a secure field.

Mrs Davies, who founded the rescue centre, a not for profit organisation, 30 years ago to provide a ‘home for life’ for unwanted or mi.stre.at.ed equines, and her daughter Hayley Davies, had never seen a horse looking such a state as the adult before.

Now, a fundraising page has been set up to pay for the pair’s vet’s bills and upkeep, and a month on and after being treated by a vet and receiving plenty of TLC, the pair of black and white piebald Cobs, a small, stout breed of horse, are both now back in good health – and, as our photographs show, look like they are jumping for joy as they canter happily around their field.

Their Radio 2-listening human friends at the centre, which is now their permanent home, have named the older horse Ken and the younger one Bruce, both after the station’s popular disc jockey Ken Bruce.

After examining their teeth, an equine dentist estimated Ken is about nine years old and Bruce is about seven to nine months old. 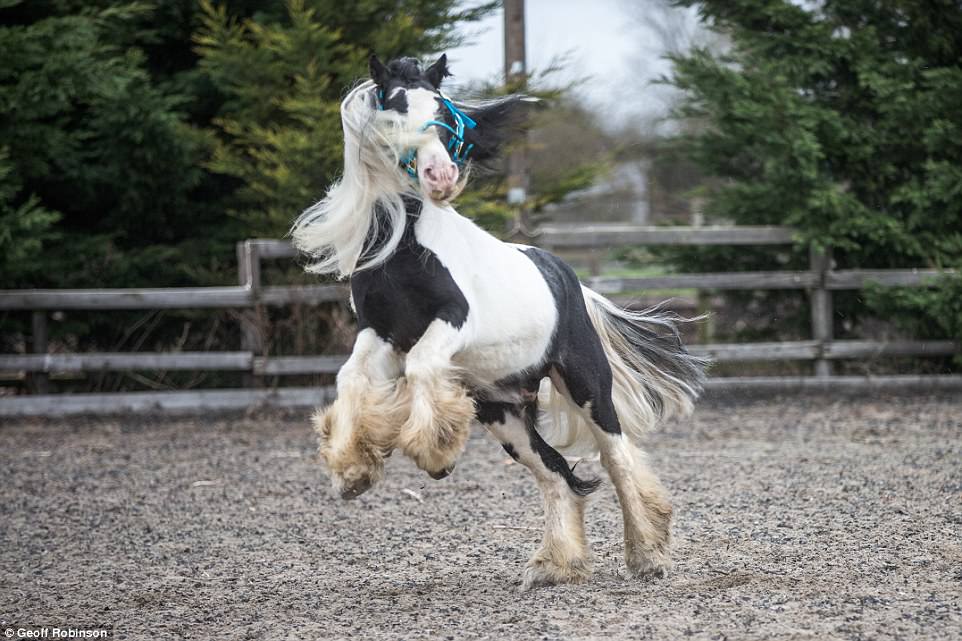 The Isleham Horse and Pony Rescue Centre near Ely, Cambridgeshire has offered the two horses (pictured, Ken) another chance at life 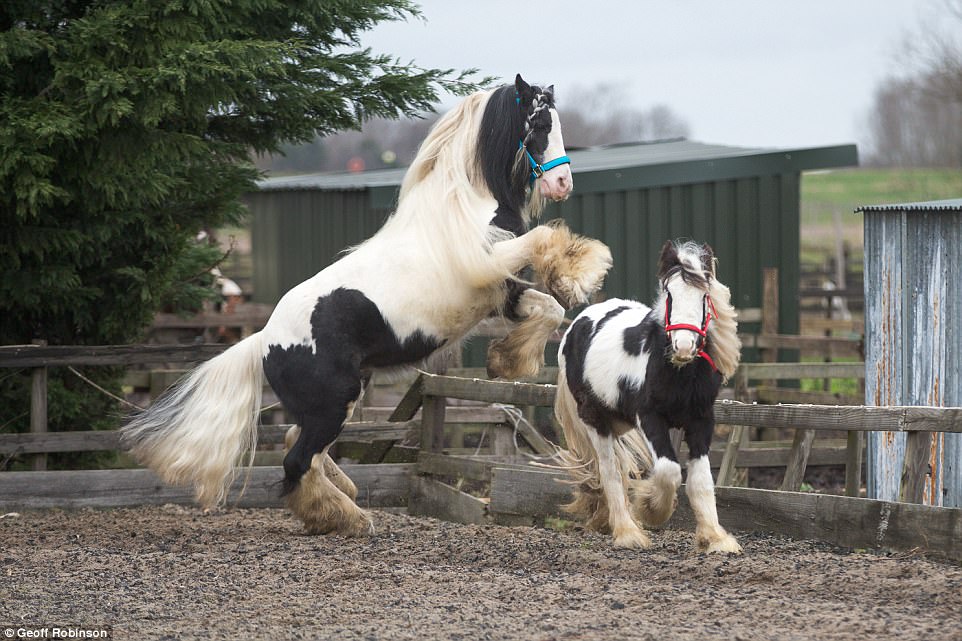 After examining their teeth, an equine dentist estimated Ken is about nine years old and Bruce (shown right) is about seven to nine months old

Miss Davies, 30, said: ‘It was horrific to see them in the state they were in. The vet gave the foal only a 50-50 chance of survival because he was so thin and weak and used to wobble when he walked.

‘With the adult the main concern was to try to get some of the hair from the hooves because it was so long. His tail was so long he was walking on it on every step he took. We had to cut about 30 inches off it.

‘I can’t imagine they had been well-cared for by anyone. They’ve been neglected just judging by the state of the hair, and the foal was very thin.

‘Normally with a cob you don’t cut much of the hair because they are traditionally meant to have nice long flowing manes and feathers on their feet, but you keep them neat and groom them daily.

‘Ken’s feathers were pure mud and pooh, all matted together, so we had to cut them off. It was about immediate relief for him and giving him more stability. He was in a lot of p.a.in walking on his tail and his feathers were very heavy.’ 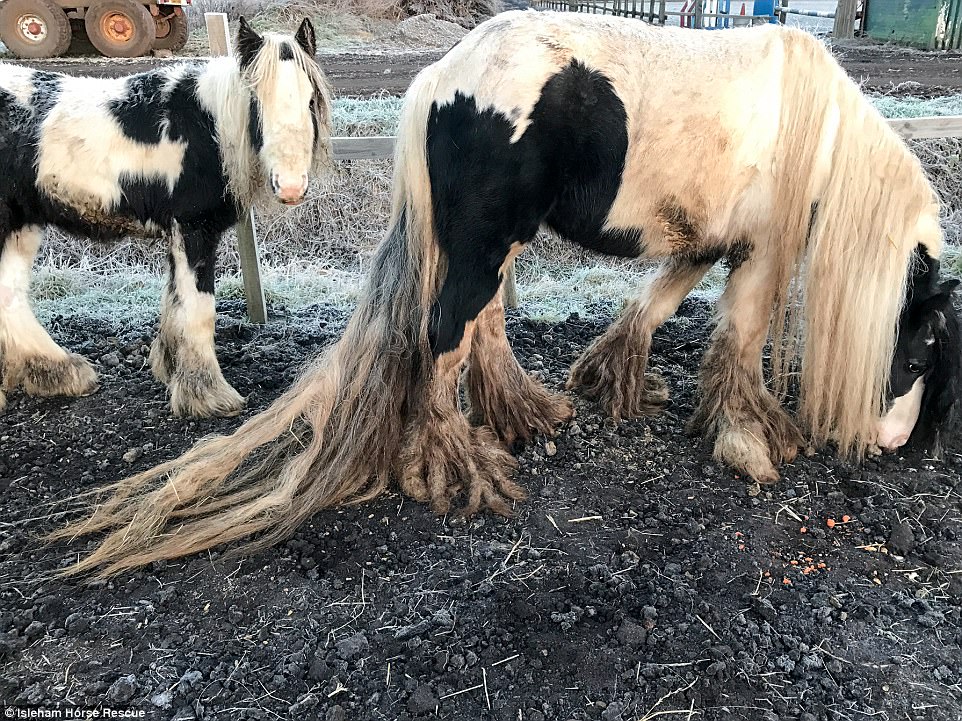 Both horses are a far cry from how they were when the first turned up at the sanctuary. They had been so unloved by their cr.u.e.l former owner, who it is thought had beaten them too, that they were te.rri.fied of any human contact 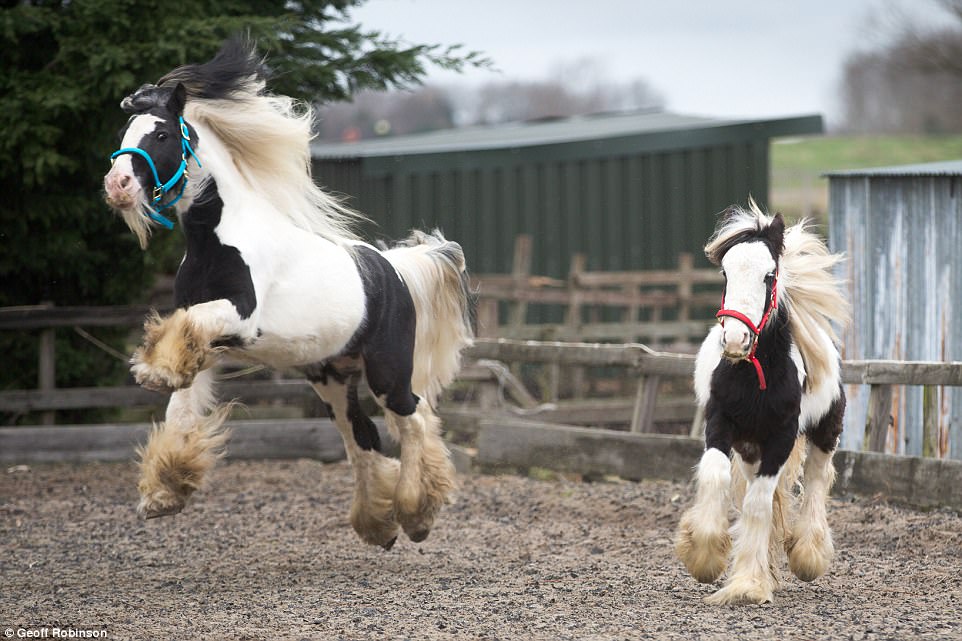 Both horses also had w.or.ms, which they have been treated for. They are steadily getting used to human contact – and Ken has developed a taste for Polo mints as a treat.

Miss Davies said: ‘It’s almost like he really does understand and appreciate what we have done for him. After his first hoof trim by the farrier, he came over to us in the stable and stood there like he was saying thank you. Before he never really came that close.

‘Bruce has come round an awful lot. He was very head-shy – he didn’t like anyone reaching out to him too quickly anywhere near his face. When foals are little you are supposed to handle them so they get used to you. He was probably be.at.en. But he has come on so well, put on weight, and no longer wobbles when he walks.’

Miss Davies added: ‘We just don’t know who abandoned them. About 12 Cobs have been taken in by the centre over the past two years.’