Skip to content
Home Babies ‘My brother has Down syndrome.’ Almost everyone: ‘Oh no, I’m so sorry! How long does he have to live?’ EXCUSE YOU?!?!’ “Me: ‘My brother has Down syndrome.’ Almost everyone: ‘Oh no, I’m so sorry!’ and the occasional: ‘How long does he have to live?’ Excuse you!?!?

I remember the first time I heard someone ask me how long he has to live, and I played it off. I was like no he’s fine! But then quickly googled it as my heart raced thinking he would die soon. Poor little uneducated me… through this google search, however, I learned that yes, people with down syndrome had a lower life expectancy due to misinformation leading them to be all institutionalized and forgotten therefore not taken well care of. It’s actually very horrific, I think it’s very important to learn about it but be warned if you research this stuff it is heartbreaking, and the images will make you sick. Anyway, luckily, times have changed and now the life expectancy is pretty average like anyone else.

Thank God! I can’t imagine my life without my brother, Joel. He certainly is my whole world and I’m so grateful for him. Joel is an amazing additional to our family and our family is so grateful for him. But, like many families, Joel came to us unexpectedly. My parents come from El Salvador and have a language barrier, so growing up I didn’t hear much from them about Down syndrome and it turns out they didn’t know a lot either.

My mother is a quiet one. When I’ve asked her questions about Joel’s diagnosis and all, I’d get one-worded responses. I can’t get mad because I am exactly the same… Just about different things. She and I see Down syndrome differently. It’s something I’ve always known. But for her, Down syndrome came to her as a surprise, and not necessarily a good at the time. Something she probably thought would never affect her let alone have her life consumed by it. We were interviewed by a local Spanish news station a few months ago and to my surprise my mom opened up and I learned more about her Down syndrome journey.

She said her pregnancy was normal at first but a few months in, her OBGYN was concerned. The doctor noticed that Joel was too small and saw signs that there might be something wrong. They wanted to do an amniocentesis. My mom thought about it and talked to a friend who advised her not to do it because she was afraid it could lead to a miscarriage. Her friend told her that it would not matter how he came or what he came with because she knew my mom would care for him and love him either way. So, my mom did not go for it. She decided if Joel was different in anyway, she’d find out at 𝐛𝐢𝐫𝐭𝐡. And she did.

Joel was 𝐛𝐨𝐫𝐧 premature at I believe 7 months. They told her almost immediately that he had Down syndrome. She said he didn’t cry and weighed only 2 pounds. He was so tiny and fragile. She admitted to feeling upset about it at first. She went on to say it was new and confusing. Both my parents reflected on how hard it was for them especially not really understanding the English language completely. I did some snooping into some old paperwork my mom kept and found out they did not get the formal diagnosis until he was three months. I also noticed that my parents were referred to the Down syndrome clinic but never went and that they received letters to sign up for other services but had trouble navigating the system and didn’t follow up for years. They did go to some specialists and they did put him in Early Steps. It’s not like they didn’t try or didn’t want him to get all the help he needed, they just needed guidance and it took a while to get it. My dad admitted they rejected some help and resources at first not really knowing why; could’ve been pride or again the language barrier. At the time, there really wasn’t as much help and accessibility to people who did not speak English.

I think it is safe to say that I was of ignorant when it came to Down syndrome, I knew the basics, the tint bit they teach you in school about it, and would see an occasion random story on my Facebook feed about someone with Down syndrome. But overall my view of Down syndrome was limited to what my experiences with Joel were. Growing up, we did not interact or spend a lot of time with other people with disabilities. In fact, I didn’t even know Joel had a disability until I was like 8ish… My family just never really talked about it. I don’t think that my family purposely did this. Part of it could be cultural and the language barrier, but I as I got older, I wanted to change that. Up until about 5 years ago Joel’s only interaction with other people with disabilities was through school and the occasional bump in out in the community.

His first venture was with Lion’s Camp. Which turned out to be his favorite thing ever. It’s a week-long camp with other teens with developmental disabilities. As time went on, I learned about so many more opportunities for Joel and I tried to get him involved in as many things as possible. Like Miracle League, Special Olympics, dances, and all kinds of other random activities and events. So, he now basically stays busy all year round and he loves it and I love being a part of it all. 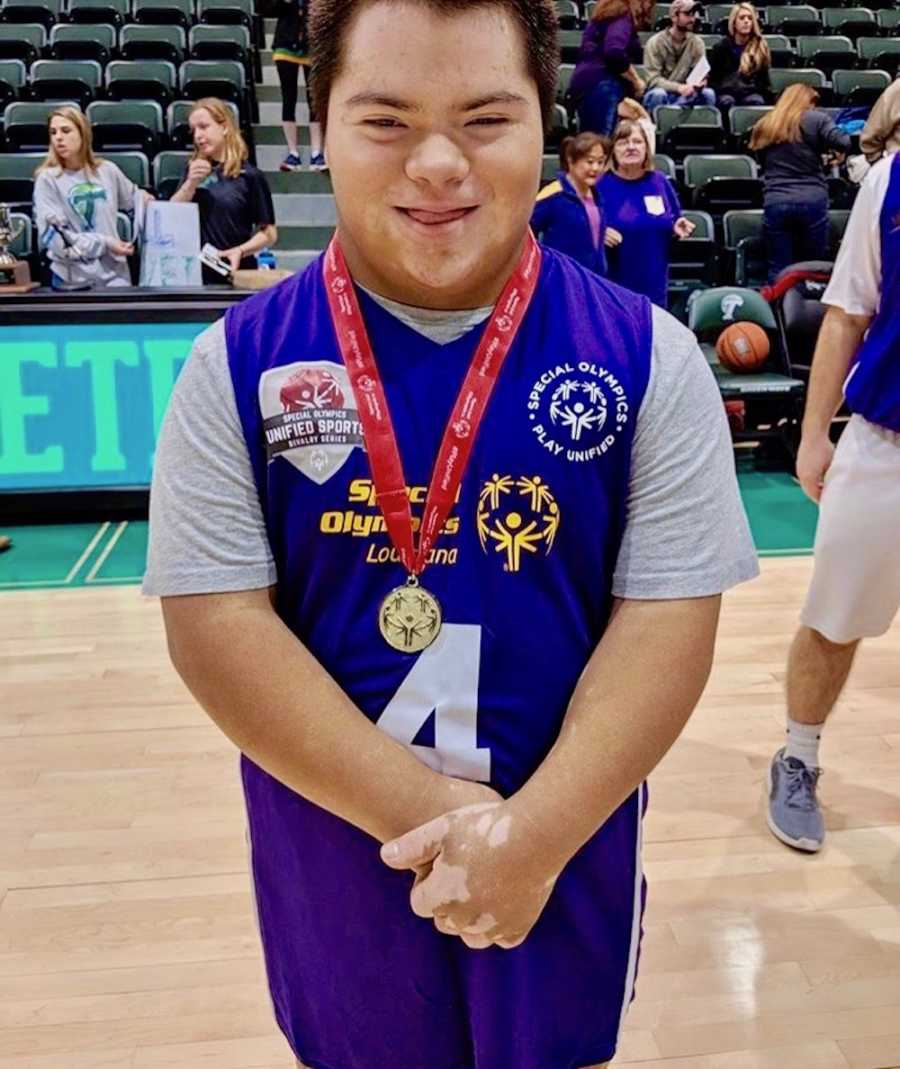 Joel is also mostly nonverbal. He tries his best to communicate and, but he can only say a handful of words. Somethings you can only understand if you spend enough time with him. But he stills finds his ways to communicate. Everyone learns and grows at their own pace regardless of whether or not they have a disability. I have seen his speech improve, in the past couple years but it is still pretty behind most of the other people with Down syndrome that I have met. Even the younger ones. It used to bother me, and to be honest it still makes me jealous at times. But I am coming to terms with where Joel is. If I keep comparing Joel to others, I won’t be grateful for where he is. And I am grateful for where he is. I am so proud of him; he has come a long way and has more to learn. Even if he doesn’t improve his speech, it’ll be enough for me. All of that to say this, the boy won’t shut up at night! Just like any other siblings, Joel and I get into fights. One of our most common fights is at night because he talks so loudly and laughs so obnoxiously at night and keeps me up. But I wouldn’t trade it for anything.

Joel has taught me so much and has literally shaped my life and has brought to the path that I am in now. Life with him is so fun and worth all of the late nights, restroom accidents, tears, scares… everything! All I will say now is I Thank God Joel has Down syndrome. I know it may not be something people ask for, but I am happy God gave us Joel. I know all of our lives would be completely different if he didn’t have Down syndrome. I am grateful that he was created this way. No pity, no prayer requests on changing this, no. I think it’s time to change the narrative. Down syndrome isn’t a curse on your family. And there is no need to apologize to me because my brother has Down syndrome. And for the record, when the doctor was worried there may be something wrong, he definitely did not mean Down syndrome. At least that’s how I’m interpreting it. Because there ain’t nothing wrong with being 𝐛𝐨𝐫𝐧 with Down syndrome! My has down syndrome, proudly!” 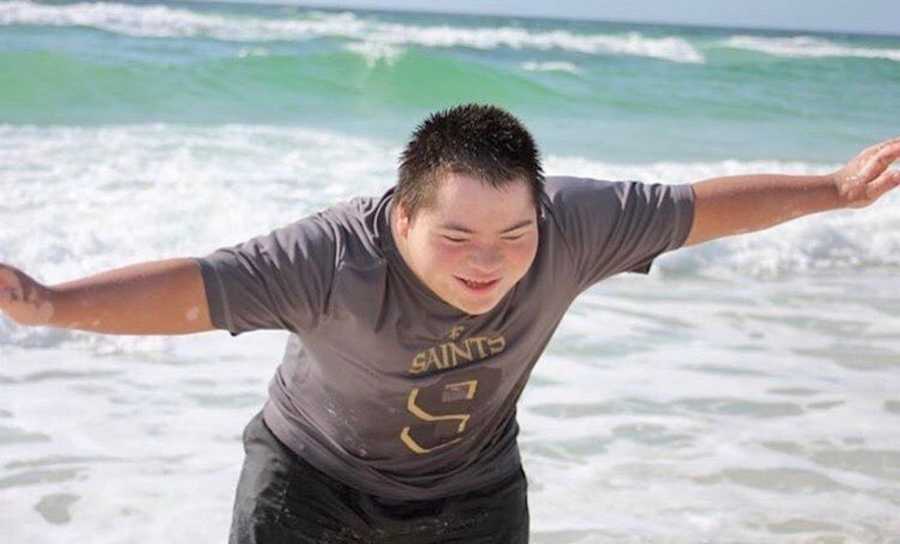 This story was submitted to Love What Matters by Raquel Castaneda. Submit your story here. For our best love stories, subscribe to our free email newsletter.

Do you know someone who could benefit from this story? SHARE this on Facebook with family and friends.

140 Shares Tweet Email brother, 𝘤𝘩𝘪𝘭𝘥ren, disability, Down syndrome, family, love, mom, motherhood, parenting, sister ‘I caught myself telling my 2-year-old son today, ‘You’re just like your daddy.’ I wanted him to act and look like me. I hoped he’d possess some of my qualities.’‘I started using wrinkle cream. I turned up Barbara Streisand and sang along. I asked the pedicure lady to scrub a little harder on the heel. Then it hit me. I have become my MOTHER.’