A spotted bush snake ambushes and delivers a fatal blow to a frog twice the size of the snake’s head. The frog fights for its life in the snake’s jaws while the snake tries to swallow it whole. 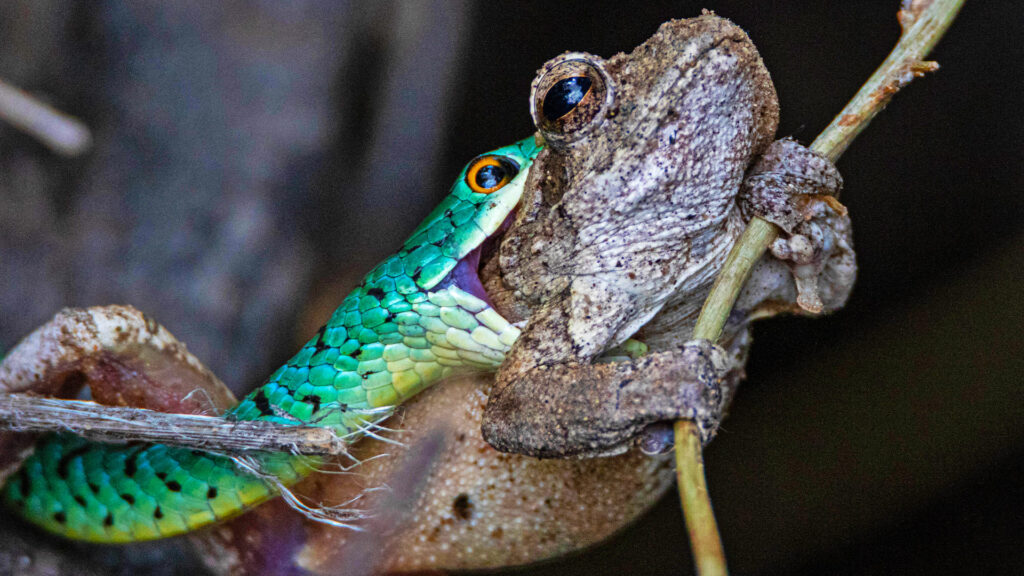 26-year-old field guide Frank De Beer witnessed this bizarre scene as it unfolded. He shared his sighting with the Latest Sightings:

“While walking around the confines of the Simbavati Hilltop Lodge in the Timbavati private game reserve, I heard a high-pitched sound. I’ve never heard anything like it before.”

“I grabbed my camcorder and looked for the culprit behind this sound. Searching the bushes around the lodge from where the sound was emanating, I was anxious as I did not know what I was looking for, nor what I would find.” 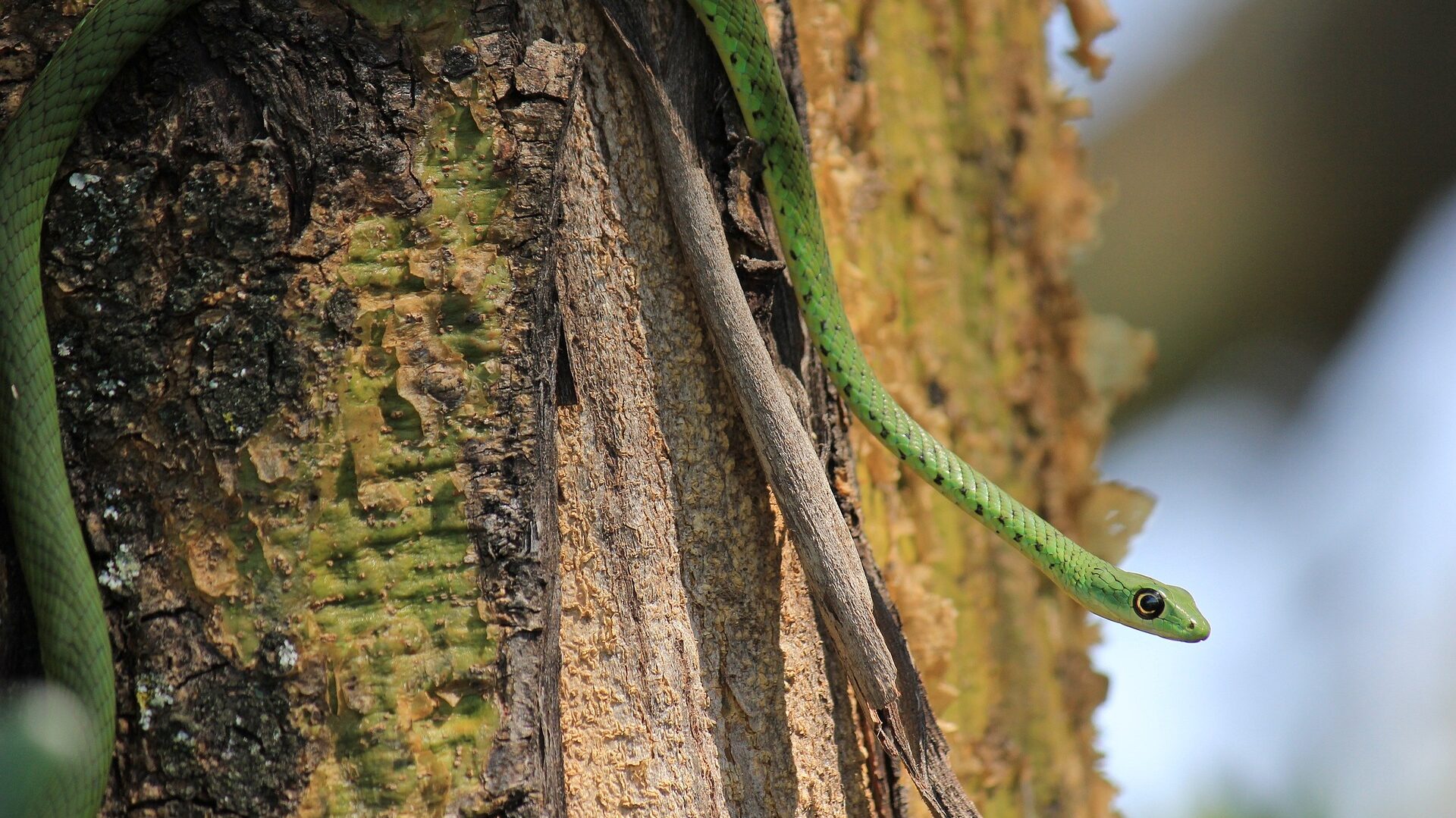 “The only certainty I had is that something is being attacked and 𝓀𝒾𝓁𝓁ed. What could it be? That is when I came across this incredible scene of a spotted bush snake with a large foam nest frog clasped tightly in its jaws!”

Spotted bush snakes are harmless snakes that prey on frogs and geckos. These bright green snakes, which can be found throughout most of South Africa, are excellent climbers. This gives them an advantage when hunting tree dwelling prey such as tree frogs and lizards.

Did you know with our app you can ting your sightings from various parks in Southern Africa! 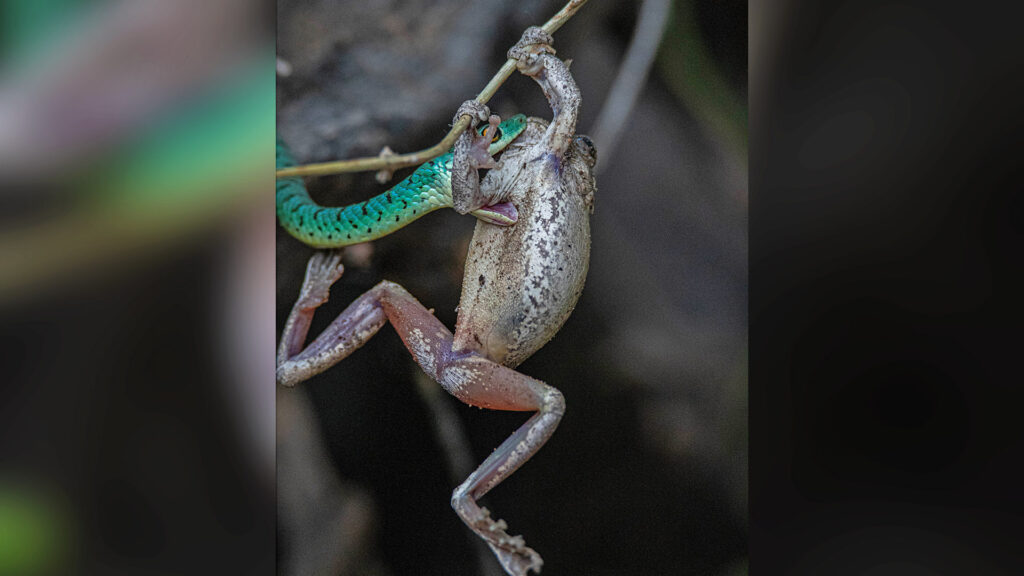 Snake ambushes and delivers a fatal blow to a frog

“I watched in awe as the frog struggled and fought for its life a few feet away from me. Even though this particular frog was relatively large, I was astounded by how easily this small snake ended the life of this frog.”

“The snake began moving off into the thickets to enjoy this well-deserved meal. After 𝓀𝒾𝓁𝓁ing the frog, the snake proceeded to swallow the frog whole and digest his large meal in the confines of some thick shrubbery.” 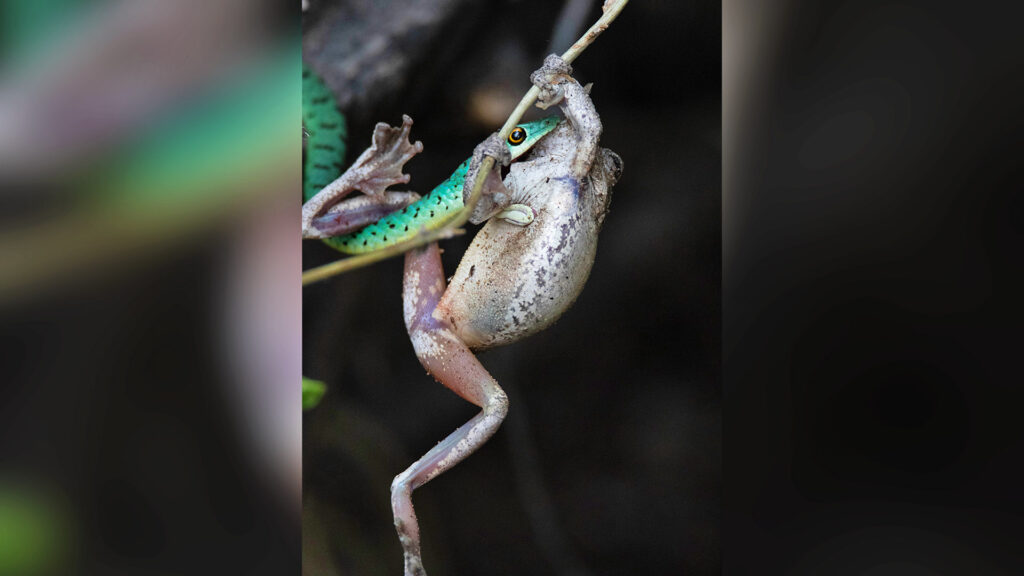 Frog holds on for life

Smaller snakes, such as this spotted bush snake, do not need to eat every day. A meal of this size could satisfy this snake for close to a week. While larger snakes need to eat only once a week, smaller snakes may need to eat twice a week. This all varies according to the size of the prey that the snake has eaten.

“Even though I get to witness the wonders of African nature daily, even for me, seeing a snake catch and eat a frog is something rare, and I consider myself truly lucky.”