The cassowary is regarded as one of the most dangerous birds on the planet. But what exactly makes this large flightless bird so deadly? 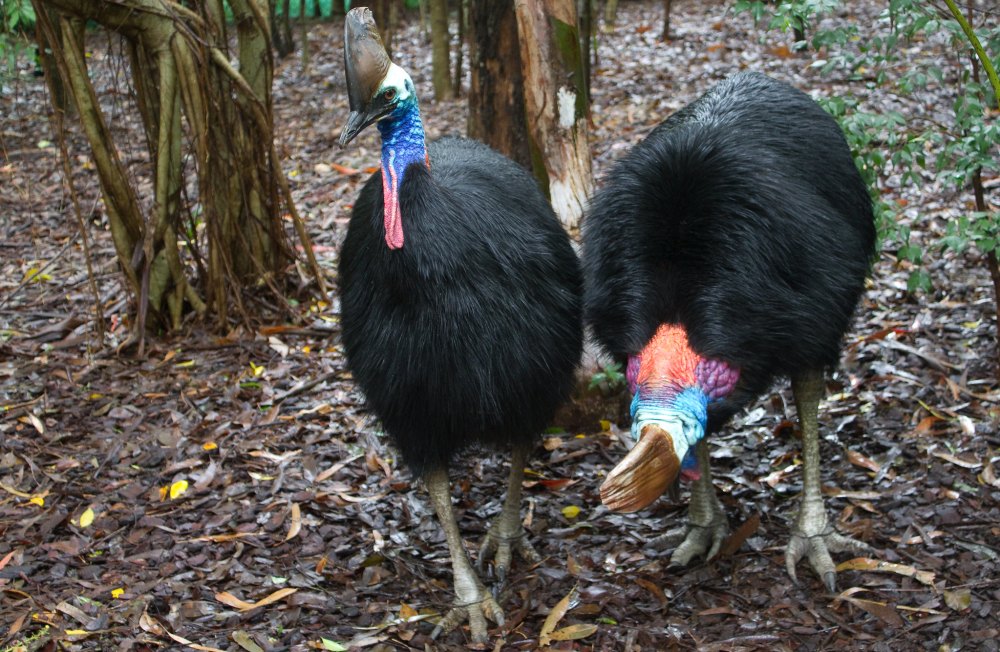 The cassowary is the third largest bird on the planet. It is thought to be the most dangerous one, though. Image credit: Brian Gratwicke

Cassowary is a type of flightless bird (ratite) that belongs to the order of Casuariiformes. These long-legged, large birds are cousins to the emus and have 3 subspecies, the most common being the southern cassowary (Casuarius casuarius). It’s much taller than the other two, the northern cassowary and the dwarf cassowary, and it’s actually the third-heaviest living bird after the ostrich and the emu. They can be found in the tropical forests of New Guinea, the northeastern part of Australia, and the Aru Islands.

Female southern cassowaries are larger and more brightly colored than males. Generally, they reach a height of 5 to 6 feet (1,5 to 1,8 meters), but some females may grow even larger; up to 6,6 feet (2 meters), and can even weigh 130 lbs (58.5 kilograms). They all have a distinctive casque on their heads that grows up to 7 inches tall (18 centimeters). These casques grow as the birds get older, so the size of a casque can help scientists estimate how old a cassowary is.

The first relatives of these birds are thought to have evolved around 60 million years ago, shortly after the extinction of the dinosaurs. Furthermore, a dinosaur fossil that is strikingly similar to a cassowary was discovered in 2017. Even though they aren’t related, cassowaries still carry a lot of ancient traits, that can only be found in few animals today. 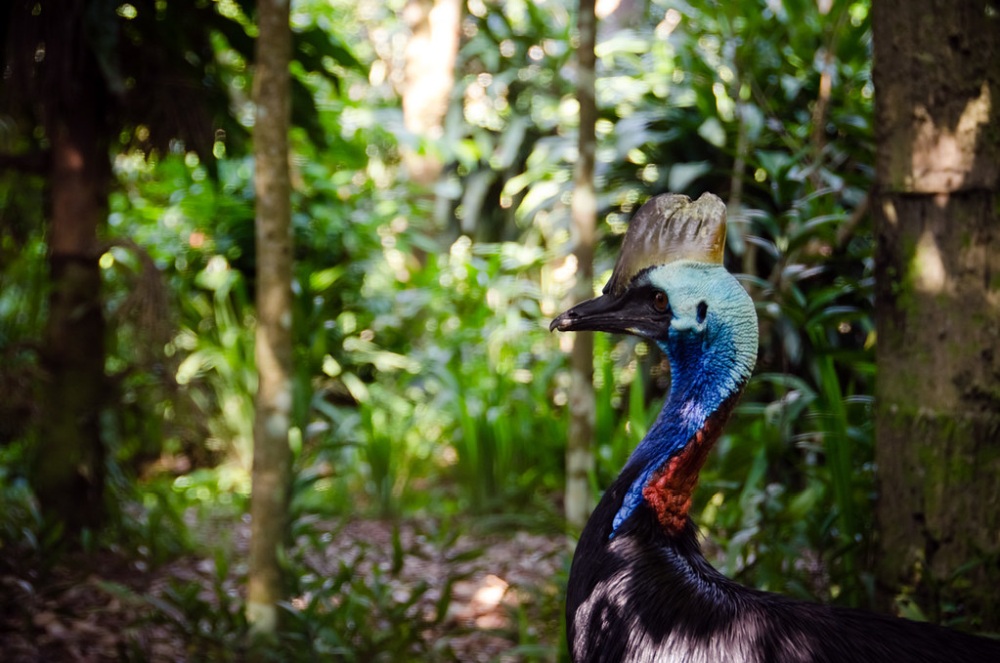 Their casque can indicate a cassowary’s age. Image credit: awee_19

Their vivid blue faces with the two red wattles hanging from their necks make them look even more menacing. They also have a wide variety of alarming sounds, that include booms, hisses, rumbles, and roars. But what makes them truly dangerous are their strong legs, which end in three toes packed with sharp claws.

They are capable of packing an extremely powerful kick and each toe on their foot ends in a lethal claw that can reach a grisly 5 inches (12 centimeters). Their kick alone is enough to cause serious injuries, but the dagger-like claws can inflict even more severe injuries that can lead to death.

If that wouldn’t be enough, they can also run as fast as 30 mph (50 km/h), and they are particularly good swimmers. So, good luck outrunning them.

Holding the claws of a male southern cassowary… Just in case any of your friends still need convinced that 🐦 = 🦖! #gradschool #PhDlife #Paleontology #dinosaurs #birdsaredinosaurs pic.twitter.com/L6vYwyXmyx

That being said, cassowaries are shy and solitary creatures who are most certainly equipped to protect themselves, but they aren’t looking for trouble.

There have only been 2 recorded cases of human fatalities from cassowary attacks. The first deadly attack happened in Australia on April 6, 1926, when two brothers tried to 𝓀𝒾𝓁𝓁 a cassowary that wondered into their property. The bird kicked the younger boy, who ran away. His older brother, though, struck it with a club, but ultimately tripped, and fell on the ground. The cassowary then kicked him while on the ground, opening a wound on his neck.

Another fatality was recorded in Florida on April 12, 2019. A cassowary owner, a 75-year-old man who was raising the large bird, was clawed to death after he fell to the ground.

However, several studies have been carried out on the threat posed by cassowaries. Research shows they don’t attack indiscriminately, and most attacks on humans have been carried out by cassowaries that were fed by humans. When they get used to being fed by people, they could run up to them and engage in a chase in hopes of food. But when no meal is offered, they can act aggressively. It seems that human feeding has modified the natural behavior of cassowaries, since they are very unlikely to attack without any provocation.

Other attacks appeared to be territorial reactions or defensive, when the bird was protecting itself or its chicks. They do dislike dogs very much, though. Many of them have been attacked by the large birds; probably because wild canines often prey on cassowaries.

In contrary to cassowaries being the most dangerous animals in the world, their biggest threat, like in the case of many other animals, is posed by humans. We hunt and 𝓀𝒾𝓁𝓁 them in large numbers, only for their meat and feathers.

Cassowary populations are also declining as their natural habitat is being destroyed because of logging and “development”. Furthermore, they are frequently being 𝓀𝒾𝓁𝓁ed on roads by speeding vehicles. A study on the causes of cassowary mortality found, that collisions with cars were responsible for 55% of the examined cases. 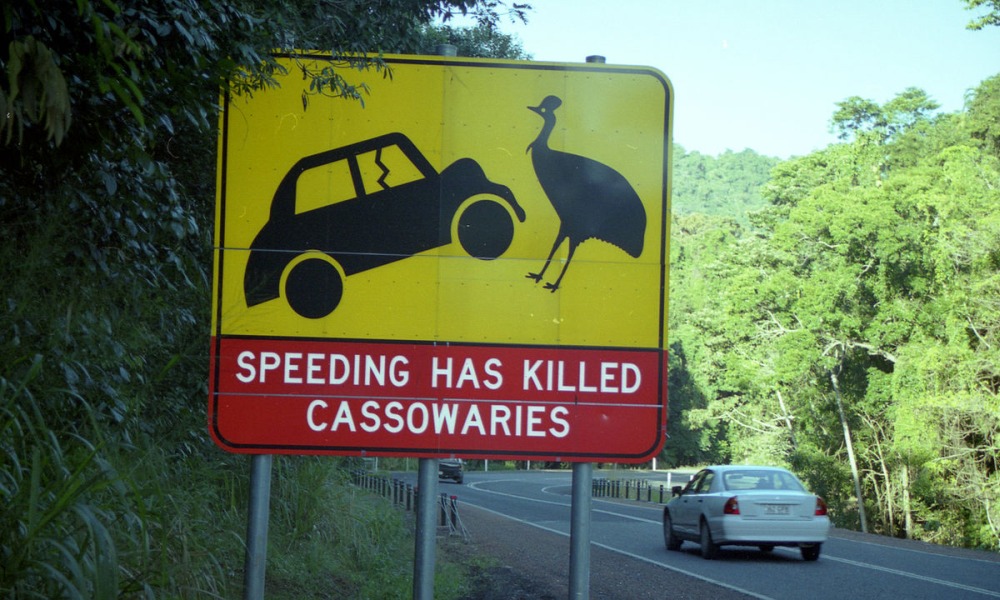 All in all, cassowaries are very tough and they possess great defensive s𝓀𝒾𝓁𝓁s, which they will definitely use in case they feel attacked. Even though they have 𝓀𝒾𝓁𝓁ed two people in the past, human fatalities caused by birds, in general, are very rare. It’s so rare, that out of every bird species, the cassowary has the highest known body-count with the 2 mentioned fatalities.

On the other hand, humans do indeed 𝓀𝒾𝓁𝓁 a lot of endangered animals every year, which is dangerous in every sense of the word.