Arabians are one of the most popular breeds for showing. They are beautiful, elegant, versatile and athletic, everything you want in a show horse.

Most of the time at horse shows, you will see a great turnout in Country Pleasure Driving classes, with horses meeting the description above.

However, as every equestrian knows, things do not always go as planned when horses are involved. 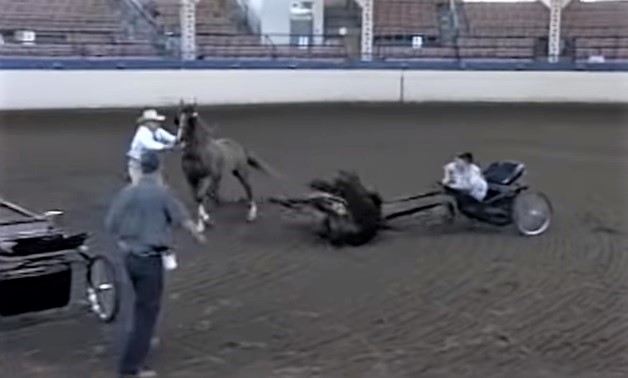 What starts out as a competitive Arabian Country Pleasure Driving class quickly spirals into a nightmare. The class took place at the Region XI Championship at the Illinois State Fairgrounds in Springfield, Illinois.

The chaos began when one horse became distressed and began bucking. The announcer quickly took note of the situation, calmly asking the drivers to walk and take a time out.

Unfortunately, the gentleman came out of the cart and his chestnut Arabian horse took off cantering. Attendants tried to catch the horse, but this only caused the horse to panic more.

The horse then bolts off and its cart eventually comes off, leading to the harness flailing about. 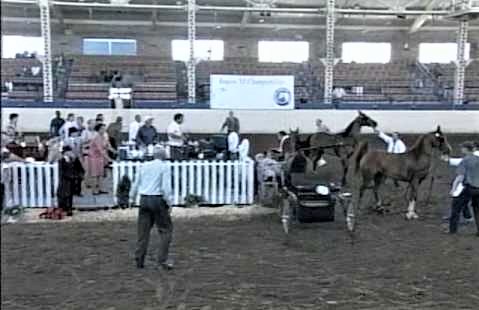 More people try to catch the horse as the announcer asks everyone to stand in the center of the ring, trying to take control of the situation.

Pure chaos then erupts as one man tries to grab the harness to stop the horse, only causing the horse to run into another horse, leading to two runaway Arabians. However, the second runaway horse is soon under control.

Another person then makes an unwise choice to try to stop the horse by running right in front of the panicked chestnut. This was a very dangerous thing to do as the horse plowed right through him, causing the man to need a medic. 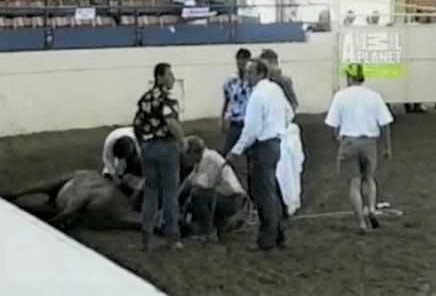 Though the chestnut horse eventually gets caught, it runs into another spooked bay that then takes off.

People continue to audibly gasp and scream, only making the situation worse, despite the announcer asking everyone to remain quiet.

After several scary minutes of disarray, the situation is finally under control. Throughout the chaos, there were several carts that came off and collisions that occurred.

See the shocking video below:

See the uncut version at the end of the article with eyewitness interviews on Animal Planet.

Accidents are prone to happen when horses are involved. However, it is important to know how to properly handle the situation to prevent any injuries.

It is important to remember to never scream or panic when there is a loose horse running, as this will only make the horse more nervous.

In addition, never stand in front of a horse that is running, this is very dangerous and can injury both you and the horse.

In a situation like this, the best option is to let the horse calm down before catching it by staying quiet and calm yourself. Running in front of the horse and putting yourself in harm’s way will not help the situation.

If you are at a horse show and a horse gets loose in the ring, follow the directions of the announcer and move to the center of the ring. The announcer in this video did a good job of handling the situation.