Sightings of black panthers, especially in Africa, are insanely rare, let alone capturing one on camera.

Well, English photographer Will Burrard-Lucas pulled it off in an incredible fashion, also confirming the existence of the elusive African black panther in Kenya. 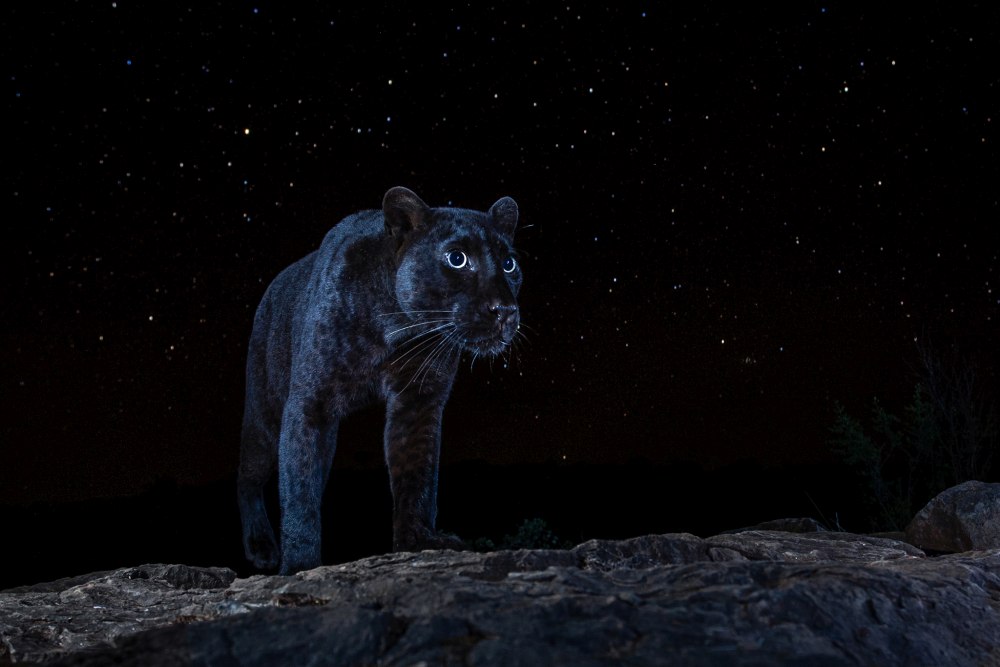 If you look closely, you can see the spots on its fur. Image credits: Will Burrard-Lucas

Surprisingly, the animal known as a “panther” refers to leopards and jaguars that have a black or white color mutation. So, the large cat we call a black panther is actually a black jaguar of the Americas or a black leopard of Asia and Africa.

In fact, black panthers have regular spots too, they are often just way too hard to notice because the fur of the animal is so dark. This dark color pigmentation mutation in a jaguar or leopard that causes the fur to be blackish occurs in about 6% of their population.

Although leopards with this rare mutation in parts of Asia have been documented plenty of times by scientists and professional wildlife photographers, there has been almost no photographic evidence of their existence in Kenya, until the efforts of Burrard-Lucas bore fruit. 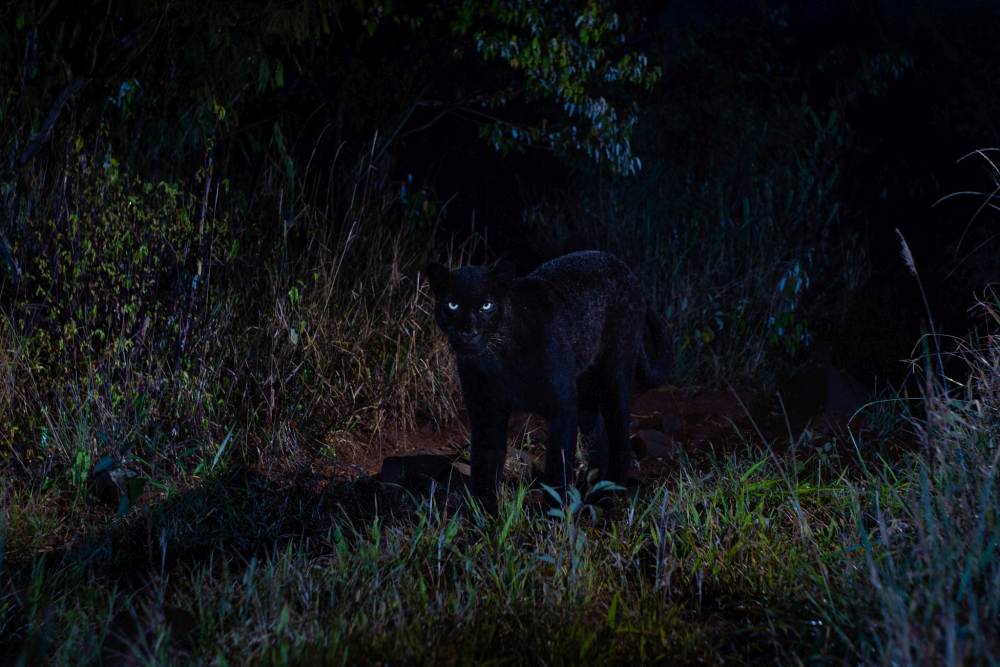 Stories have emerged out of Kenya about people claiming to have seen black panthers in the African country, but without concrete evidence, no one could back these claims. Our photographer in question, Will Burrard-Lucas has heard the stories as well. Driven by his fascination for these animals and the fact that no one was able to capture good-quality pictures of these creatures in the country before, he decided to travel to Kenya and investigate. 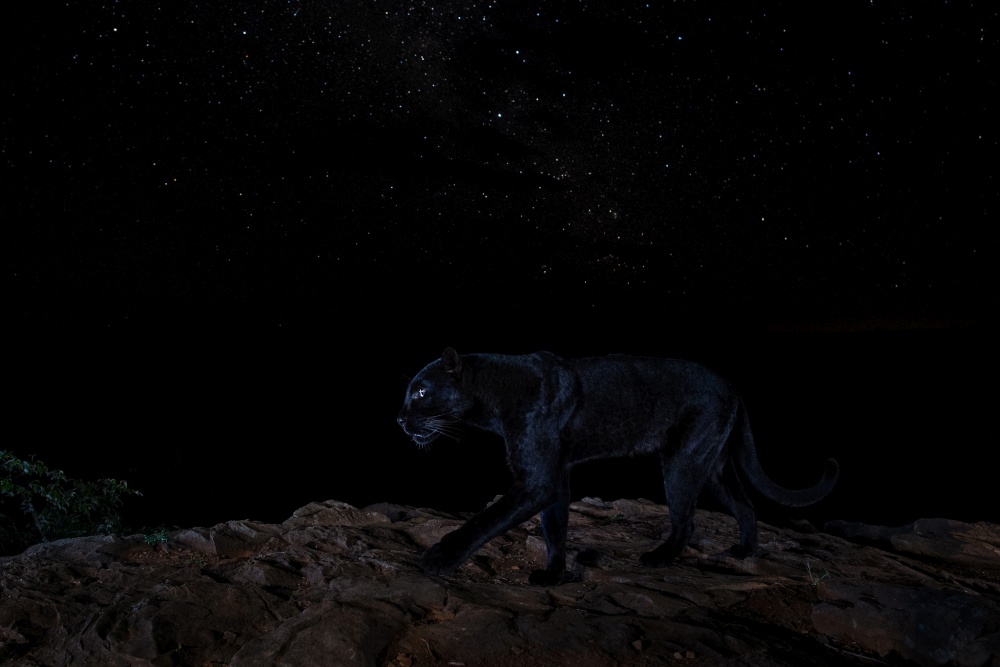 The black panther perfectly blends in to the star filled night sky. Image credits: Will Burrard-Lucas

After arriving at the source of one of these stories, Burrard-Lucas and his team began their fieldwork in order to locate the territory of the leopards. Although the team could identify and follow the tracks left behind by the big cats, leopards are quite territorial and there are other signs which can help to determine the territory of the leopards. They often mark their occupied area with feces, urine and by rubbing their body on trees. Leaving claw marks on the ground, trees or logs is also a way of communicating the borders of their territory towards other leopards.

They deployed several motion sensor cameras around the area, which they thought would be the best to capture the black leopard at. However, when checking the cameras after the first night, Burrard-Lucas discovered they had no images of leopards. 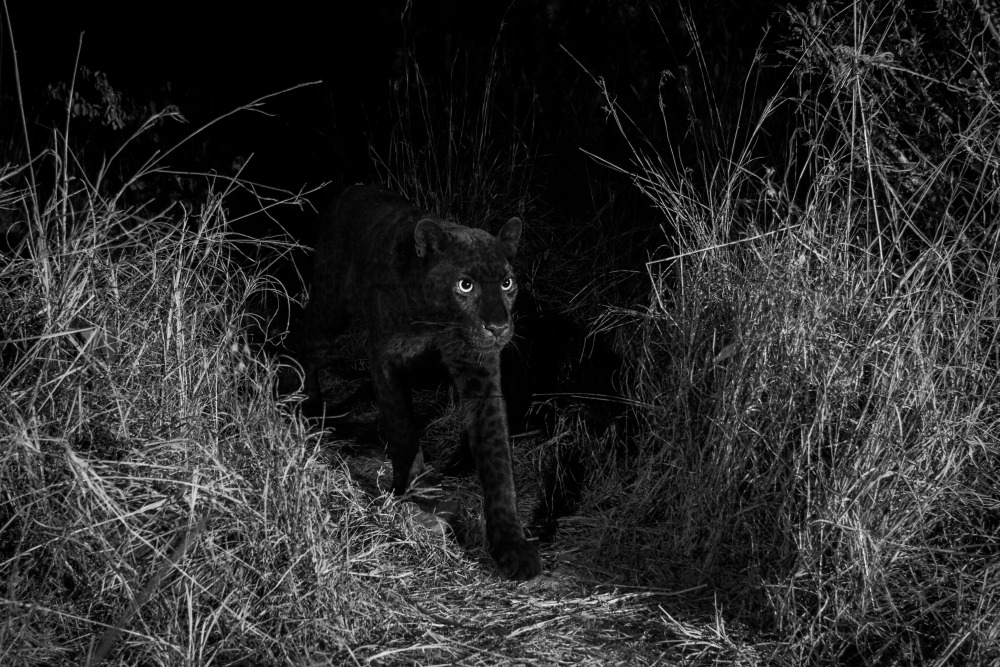 The first high-quality picture of a black panther in Kenya. Image credits: Will Burrard-Lucas

While the first night didn’t bring any success, this didn’t discourage the team to leave the cameras out for several more nights, hoping to finally capture the elusive African black panther.

Leopards, and well, pretty much all the big cats are excellent hunters, but unlike lions, they live a solitary lifestyle. So it’s no surprise that it’s hard to capture one of the most secretive and stealthy creatures in the animal kingdom, especially if it’s black.

When looking through the cameras for a second time, Burrard-Lucas was disappointed to see that the pictures showed mostly hyenas, and there was no sign of leopards. At least that’s what he thought until he checked the last camera. Images from the last camera revealed “a pair of eyes surrounded by inky darkness”. It was of a black panther. The picture, which you can see above is the first high-quality camera trap photograph of a wild melanistic leopard ever taken in Africa. 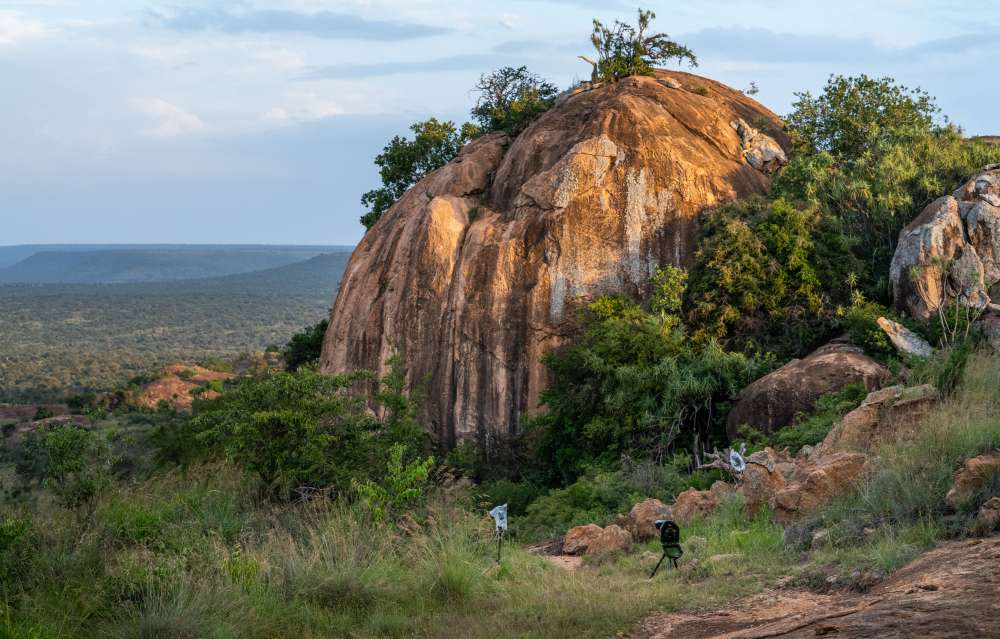 The cameras used for capturing the amazing images. Image credits: Will Burrard-Lucas

In the course of the next few days, the team moved the camera setup around as they began to understand the black panther’s movements and Burrard-Lucas was able to return home with a series of extraordinary shots that confirm the presence of black panthers in the area for the first time in nearly a hundred years.

Inspired by the success of the first project, Burrard-Lucas wanted to set the bar even higher by capturing the mighty black panther under the night sky. He described the second series as the rarest and most difficult wildlife photo shooting he had attempted up to that point.

His experiences have been realesed in a book titled The Black Leopard, which includes many previously unseen images of the animal. Be sure to check out! 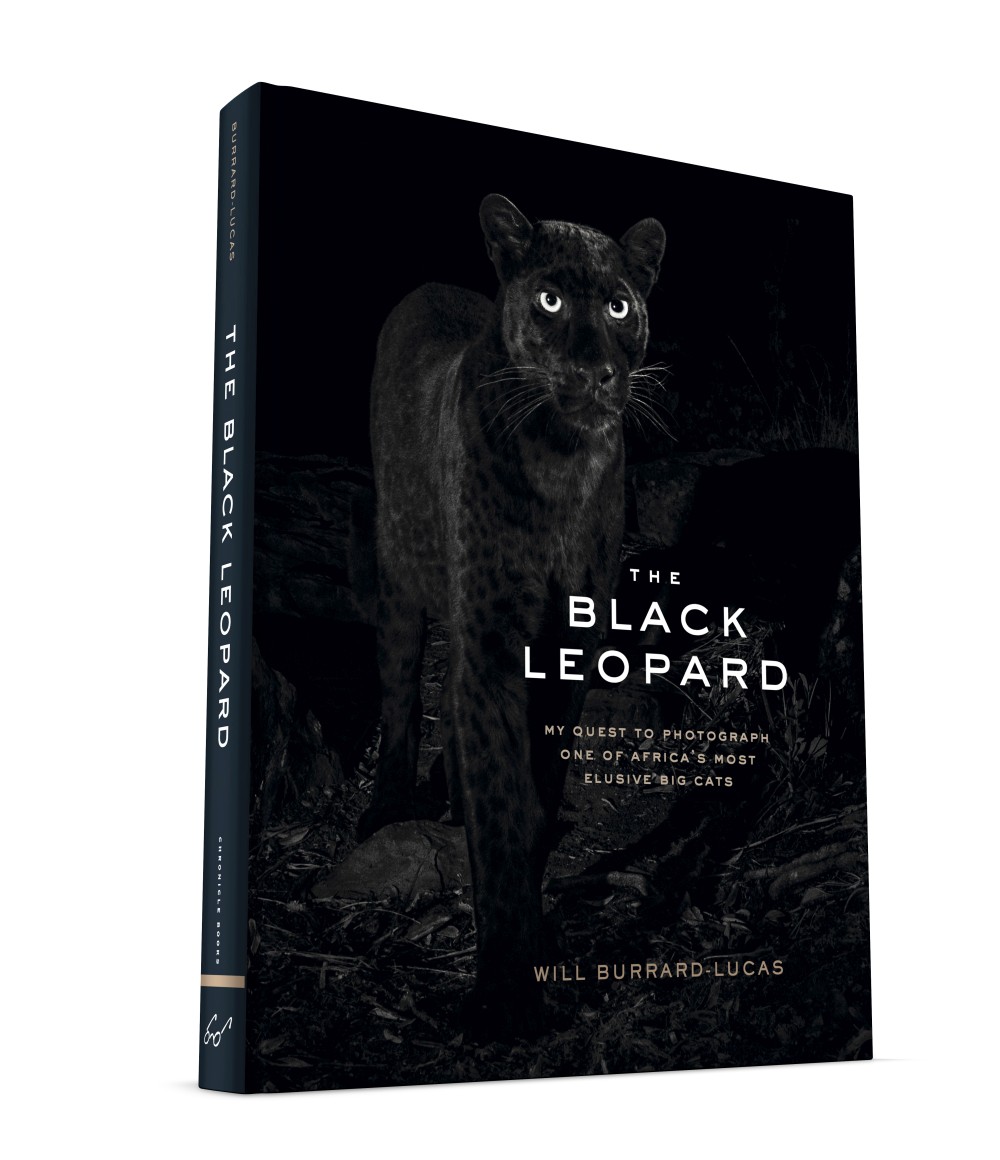 As he explains in the book, the environmental factors, such as the clearness of the sky and the light of the moon and the stars, made the perfect picture to be captured very difficult. The newly set goals took Will Burrard-Lucas and his team six months to complete, but the results are beyond amazing as the black leopard can be seen walking in front of the dark sky, with the stars shining in the background. 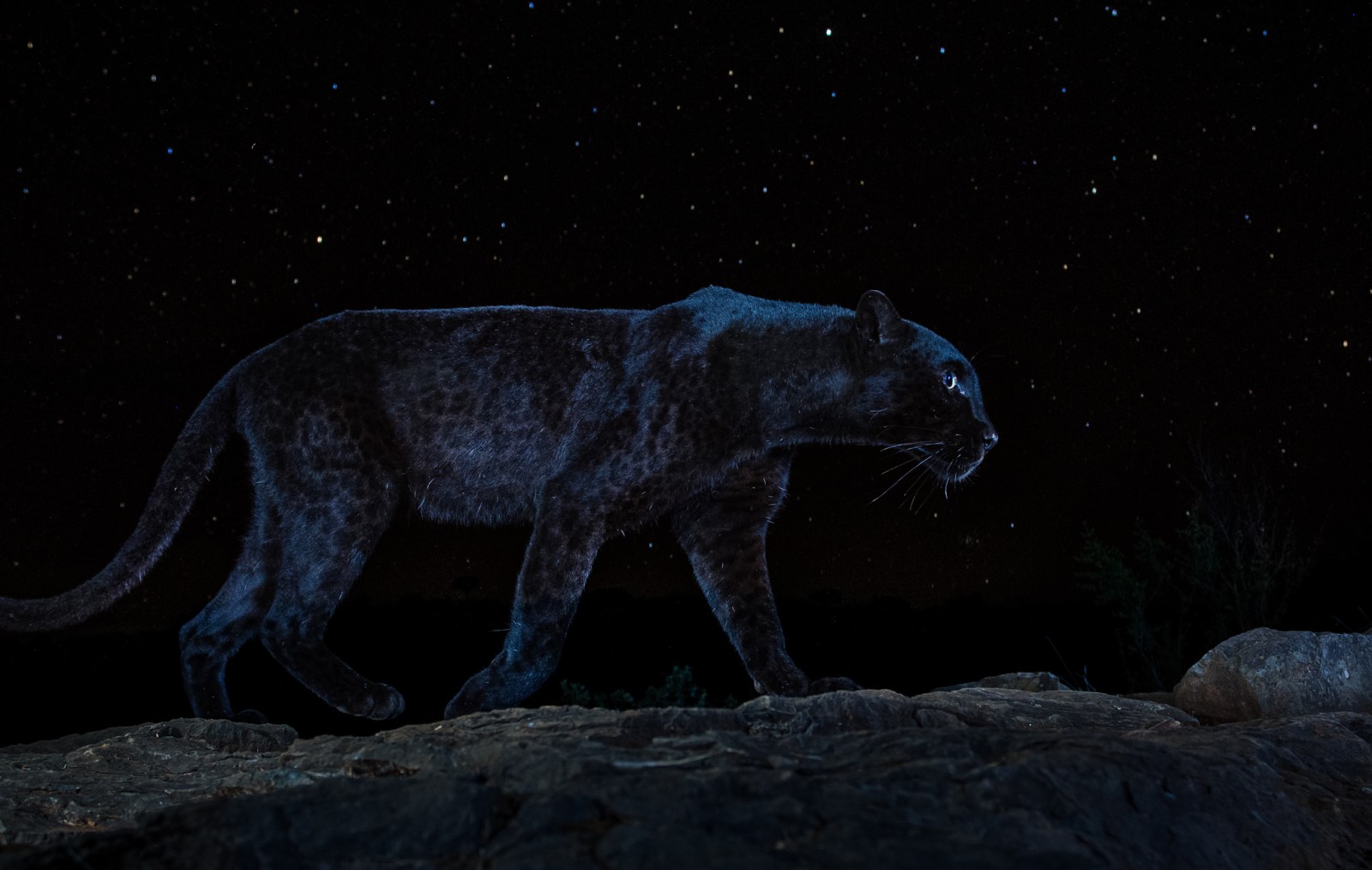