A gruesome-looking sea creature gave beachcombers the fright of their lives after it was spotted washed ashore on a San Diego beach Tuesday. Footage of the freaky flotsam is currently making waves online.

“I have never seen anything quite like this before,” Jay Beiler, who took the photos, told NBC of the sea monster, which he stumbled upon on Torrey Pines State Beach.

Initially thinking the critter was a “jellyfish,” the beach-goer realized upon closer inspection that it was, in fact, a fish, Storyful reported. By that time, a large crowd of curious onlookers had gathered around to gawk at his find.

“It’s the stuff of nightmares — mouth almost looked bloody!” exclaimed Beiler, who estimated the sea creature to be about a foot long.

His photos show the critter, which sports rows of undulating teeth and a fleshy tassel atop its head like if a sea bass was designed by Tim Burton. 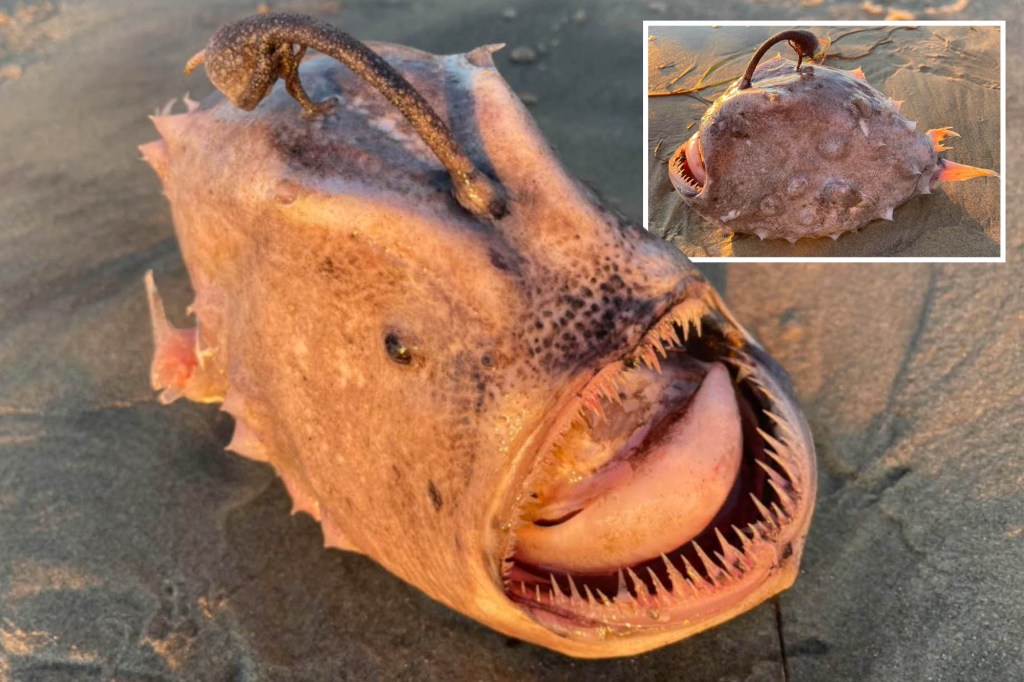 The Scripps Institution of Oceanography has since identified the animal as a Pacific Footballfish, one of the larger species of anglerfish with a maximum length of 2 feet, NBC reported.

The oceanic predator is notable for the fleshy, bioluminescent head protuberance that it uses to lure small prey a la its “angler” namesake, according to the California Academy of Sciences.

And if its looks weren’t scary enough: The male footballfish is a 𝓈ℯ𝓍ual parasite that impregnates the female by fusing itself to her body and pumping her with sperm like a lecherous lamprey.

As the footballfish typically resides at depths of 2,000 to 3,300 feet, sightings on land are exceedingly rare. In fact, Beiler’s find marks the first time this ocean denizen has been sighted in San Diego since 2001, Accuweather reported.

“It’s only been seen a few times here in California,” said Ben Frable, the collection manager of the marine vertebrate collection at Scripps. “The Pacific footballfish is known from 30 specimens that have ever been collected and brought to museums around the Pacific Ocean.”

However, scientists are “not really quite sure what causes them to wash up,” he said.

Beiler, for one, is still buzzing from the encounter.

“You know, I go to the beach fairly often, so I’m familiar with the territory, but I’ve never seen an organism that looked quite as fearsome as this,” he said.

This isn’t the first time a rare fish has washed ashore of late. In July, Oregon beachcombers were stunned after discovering a wildly colorful 100-pound Opah on the shore of the state’s northwestern region.