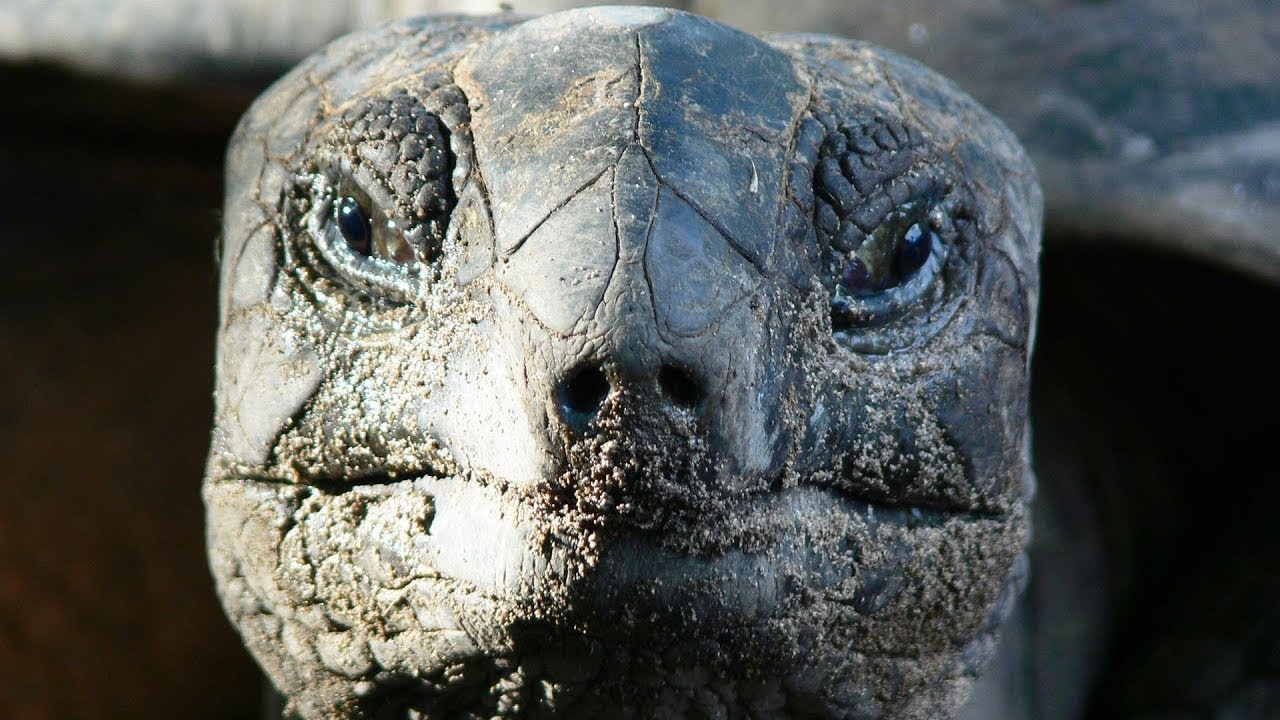 One would think even a helpless 𝑏𝑎𝑏𝑦 bird needn’t worry too much about being attacked by a tortoise. But you’d be wrong. Footage captured last year shows a Seychelles giant tortoise – a slow-moving species thought to be entirely herbivorous – attacking and gobbling up a 𝑏𝑎𝑏𝑦 bird. And it’s kind of hard to watch …

We tend to think of tortoises – those terrestrial, stalk-necked members of the turtle order – as placid vegetarians: munching cacti in the North American desert, grazing cow-like on the close-cropped Aldabran “tortoise turf,” feasting on lettuce in home terraria. The combination of a superlatively sluggish gait and herbivorous preferences paints a picture of altogether placid, inoffensive reptiles. 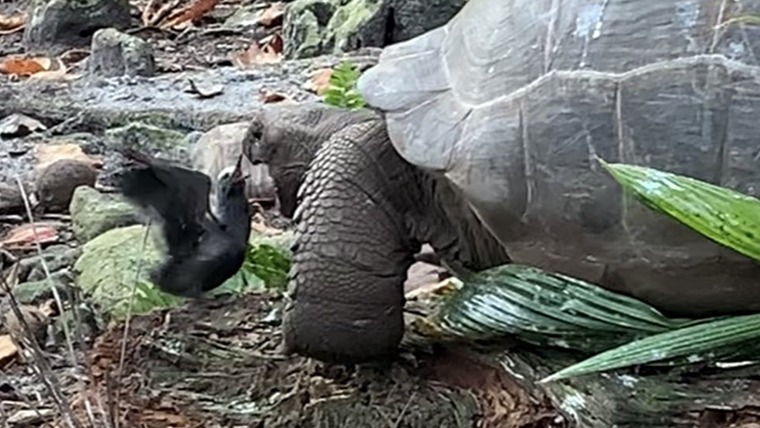 And, thanks to a certain tale concerning a race with a way-overconfident hare, we all learn early on that tortoises are not exactly speed demons. That’s all the more true when it comes to giant tortoises, the supersized, elephantine representatives of the clan once widely found on many isolated tropical island groups but now restricted to the Seychelles and Galapagos archipelagos. They’re truly lumbering heavyweights, sometimes tipping the scales at north of 250 kilograms (550 pounds).

But a new report from the Seychelles documents a surprising case not just of tortoises engaging in meat-eating, but all-out (if sort of slow-motion) bloodlust. A paper published in August in Current Biology details a 2020 observation of a Seychelles giant tortoise on the island of Frégate 𝓀𝒾𝓁𝓁ing and gulping down a tern chick: a 𝑏𝑎𝑏𝑦 lesser noddy, to be specific, which had fallen from its nest.

The event was caught on video by Anna Zora of the Frégate Island Foundation. She co-wrote the Current Biology paper with Dr. Justin Gerlach, a University of Cambridge biologist who, amid work on island evolutionary patterns and conservation, has done much research on Indian Ocean giant tortoises.

The grounded noddy chick, perched on a log, attracted the attention of a female giant tortoise, which approached it directly. The chick tried to peck at its enormous persecutor while retreating down to the end of the log. That’s where its fate was sealed. The tortoise, which had tried to snatch the bird with open jaws several times, finally managed to chomp the chick’s head. The 𝓀𝒾𝓁𝓁ed chick fell from the log, and the tortoise clambered after and swallowed its prey whole. 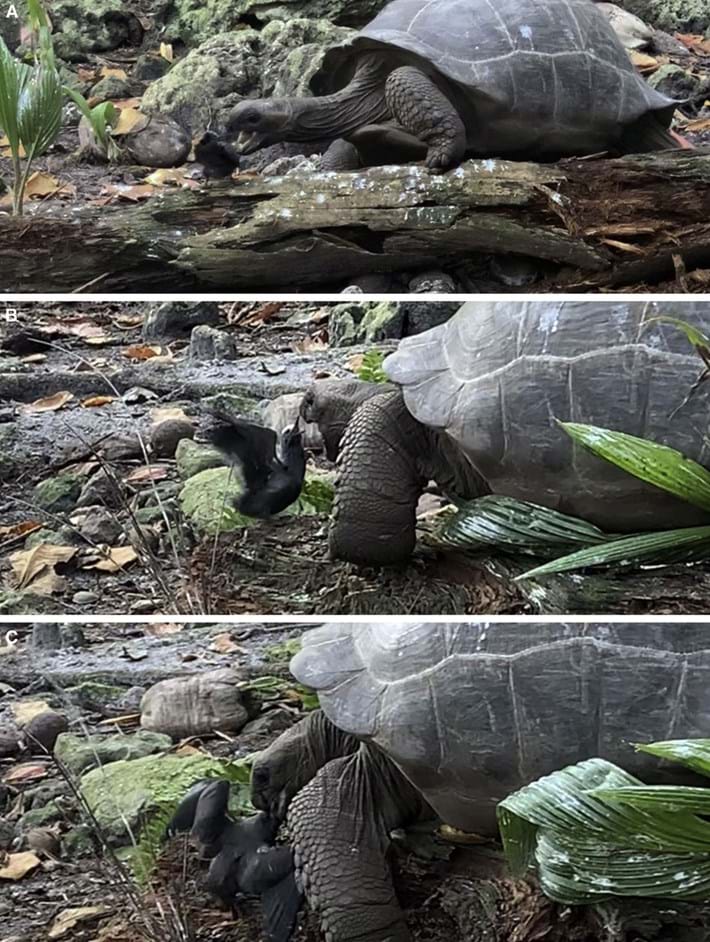 Gerlach and Zora note that a variety of tortoise species have been seen scavenging meat and munching on bones and snail shells, presumably for the calcium, and that captive Asian forest tortoises have chowed down on frogs. There have also been anecdotal reports of giant tortoises 𝓀𝒾𝓁𝓁ing other critters – crushing finches in the Galapagos and crabs on Aldabra – though how intentional the acts have been isn’t clear. But the filmed Frégate Island incident “is the first documentation of deliberate hunting in any tortoise species,” they write.

However, they also emphasize it may not have been an isolated phenomenon. Giant tortoises on Frégate have been seen eating dead seabirds, and there are accounts of other potential hunting behaviour aimed at lesser-noddy and fairy-tern chicks – just not, until now, with actual confirmed observation of a tortoise 𝓀𝒾𝓁𝓁ing and consuming one. Coupled with these other clues, the focused, aggressive approach of the female tortoise when attacking the noddy chick – with, the authors note, her tongue retracted, quite unlike when tortoises are browsing or grazing – suggests some individual giant tortoises on Frégate have learned to hunt fallen nestlings. 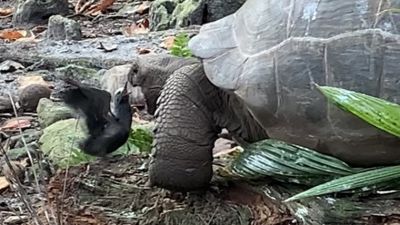 Given a giant tortoise’s (ahem) limited speed and agility, it would seem only a select few animals could fall within its potential prey spectrum. Frégate, part of the Inner Islands of the Seychelles, may provide a unique setup for tortoise predation on seabird chicks. Mostly cleared for agriculture in the 1800s, the privately owned island has been subject to intensive ecological restoration. Reintroductions returned Aldabra-Seychelles giant tortoises – which constitute a confusing and somewhat disputed taxonomy – to Frégate. And the restored habitat has seen seabirds return in large numbers as well; a colony of some 265,000 noddies now nests on the isle.
Read more: This giant tortoise was chomped by an ancient mystery croc
Chicks of the tree-nesting lesser noddy, Gerlach and Zora note, are probably more inherently vulnerable to predation than those of ground-nesting seabirds, likely more adept at out-manoeuvring a tortoise and also more actively defended by parents. “Predation by tortoises has not been reported from the islands where such species and tortoises overlap,” they write in the paper. 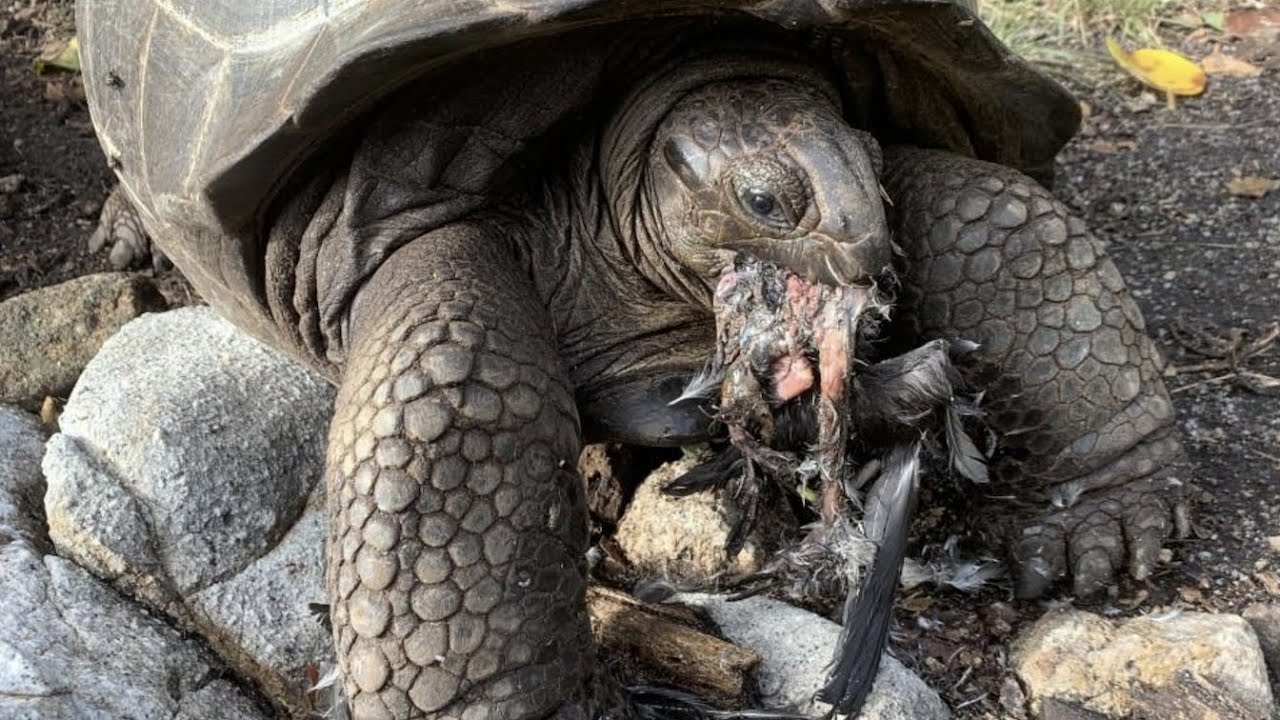 In a Science News article documenting the finding, Gerlach suggested the doomed little lesser noddy in the video could probably have tottered away to safety, but may have clung to the log because of its familiarity with a tree-canopy environment.

Speaking to Jason Bittel for the New York Times, longtime Galapagos-tortoise researcher James Gibbs – who described the Frégate tortoise’s hunting method as “a very interesting combination of diligence and incompetence” – suggested that the animal’s 𝓈ℯ𝓍 may be significant: The female tortoise may have been capitalising on a precious source of calcium – essential in the production of eggshells – in the form of the unlucky tern chick.

On his website, Gerlach indicates that further research will seek to clarify how widespread this kind of chick-hunting is among Frégate’s tortoises. “Similarly,” he writes, “we don’t know if this is a totally new behaviour that has developed or something that tortoises used to do hundreds of years ago, before humans disrupted island ecosystems and decimated the tern and tortoise populations. Restoration of islands like Frégate may also be restoring ancient species interactions, and so changing our preconceptions.”

Gerlach recently tweeted that since publication of the Current Biology paper he’s received numerous reports of tortoise meat-eating, including a few other potential cases of active predation. “I’ll compile these into a review of carnivory in different tortoise species,” he posted, “so please do keep them coming.”