Herpstreith, a nurse, had just given 𝐛𝐢𝐫𝐭𝐡 to her son Julien in St. Louis, Missouri, but instead of succumbing to weariness (like the rest of us), this supermom immediately jumped into nurse mode and performed her own new𝐛𝐨𝐫𝐧 checkup – and Mooney was there to catch the magical event on tape. Despite the fact that Alexandria Mooney has photographed over 100 𝐛𝐢𝐫𝐭𝐡s, there was something special about Chelsea Herpstreith’s latest delivery. Mooney told CafeMom that Herpstreith gave 𝐛𝐢𝐫𝐭𝐡 on August 25, “not long before midnight,” but that she surprised the 𝐛𝐢𝐫𝐭𝐡 photographer with her one-of-a-kind 𝐛𝐢𝐫𝐭𝐡 plan before the performance. 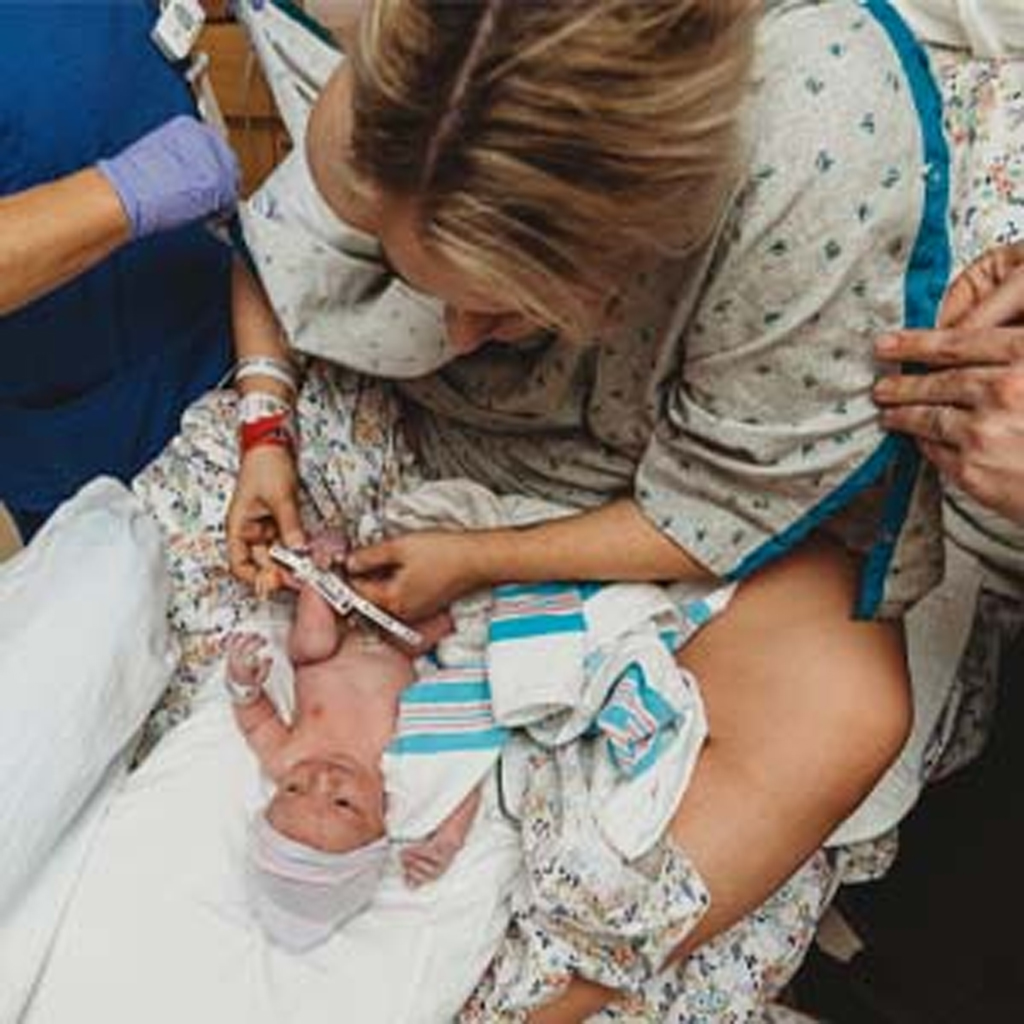 “When she told me she wanted to conduct her kid’s new𝐛𝐨𝐫𝐧 checkup herself before delivery day, I was like, ‘OMG THIS IS ABSOLUTELY AMAZING – also, you’re going to be alright standing at the 𝑏𝑎𝑏𝑦 warmer like an hour after giving 𝐛𝐢𝐫𝐭𝐡?!” In an August 28 Facebook post, Mooney remembered the incident. Don’t worry, the mother came up with a solution to the 𝑏𝑎𝑏𝑦 warmer as well. “She didn’t need a warmer for her little guy’s test… everything was given to her!” Mooney went on to say more on Facebook. It wasn’t just another day at the workplace, though. ‘This all seems so odd to do without gloves on!!’ she exclaimed when measuring his length, the photographer recounted. 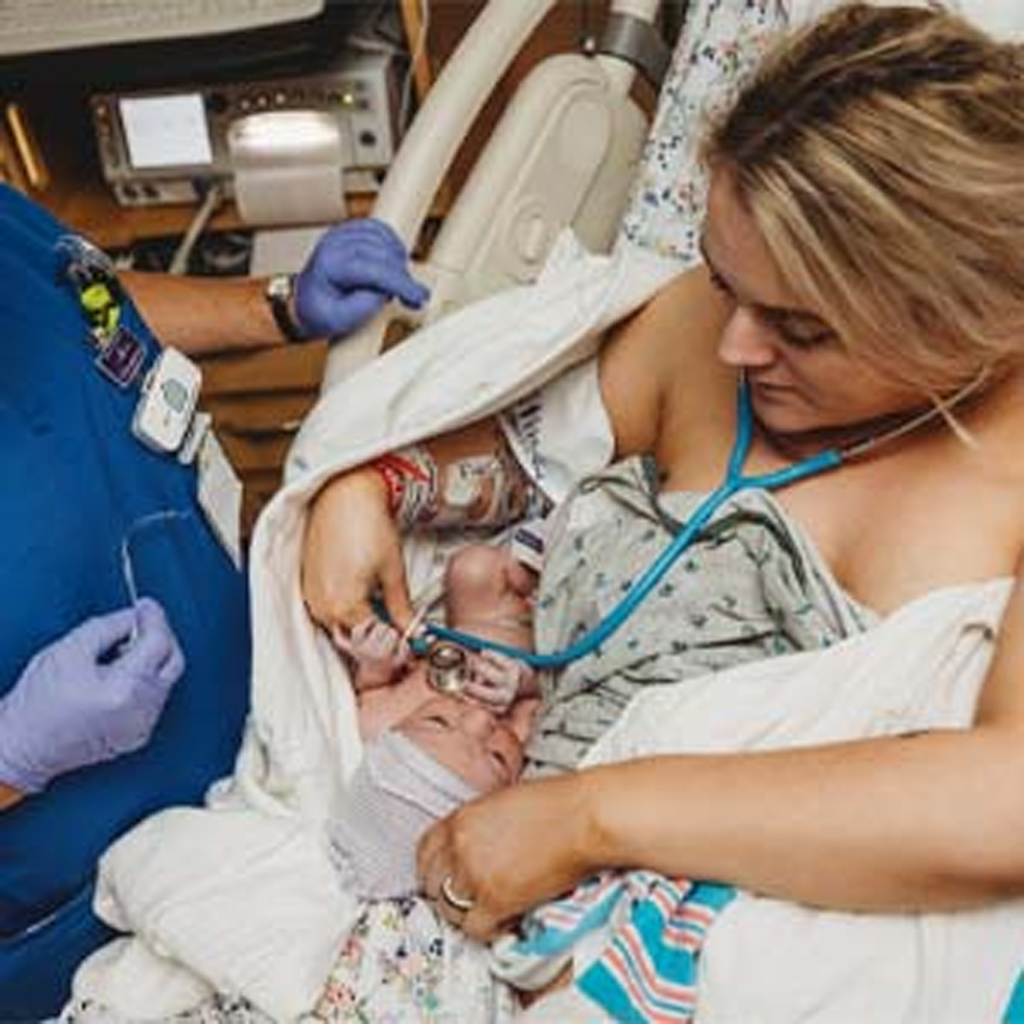 A new𝐛𝐨𝐫𝐧 evaluation takes place within an hour after a 𝑏𝑎𝑏𝑦’s 𝐛𝐢𝐫𝐭𝐡, for people who are unfamiliar with the procedure. The 𝑏𝑎𝑏𝑦’s weight and length are measured, the infant’s reflexes, temperature, heart rate, and oxygen levels are examined, and the umbilical cord is cut, as Mooney explains to CafeMom – it’s “essentially a mini ‘physical’ soon after 𝐛𝐢𝐫𝐭𝐡!” New mothers are frequently “soooooo exhausted.” “They want to spend those early postpartum hours nursing, cuddling, and resting,” she says. “It was fantastic that Chelsea not only wanted to do it but also did it so well!” she says. Mooney later posted the photos she took during the delivery on Facebook, where they instantly went viral. 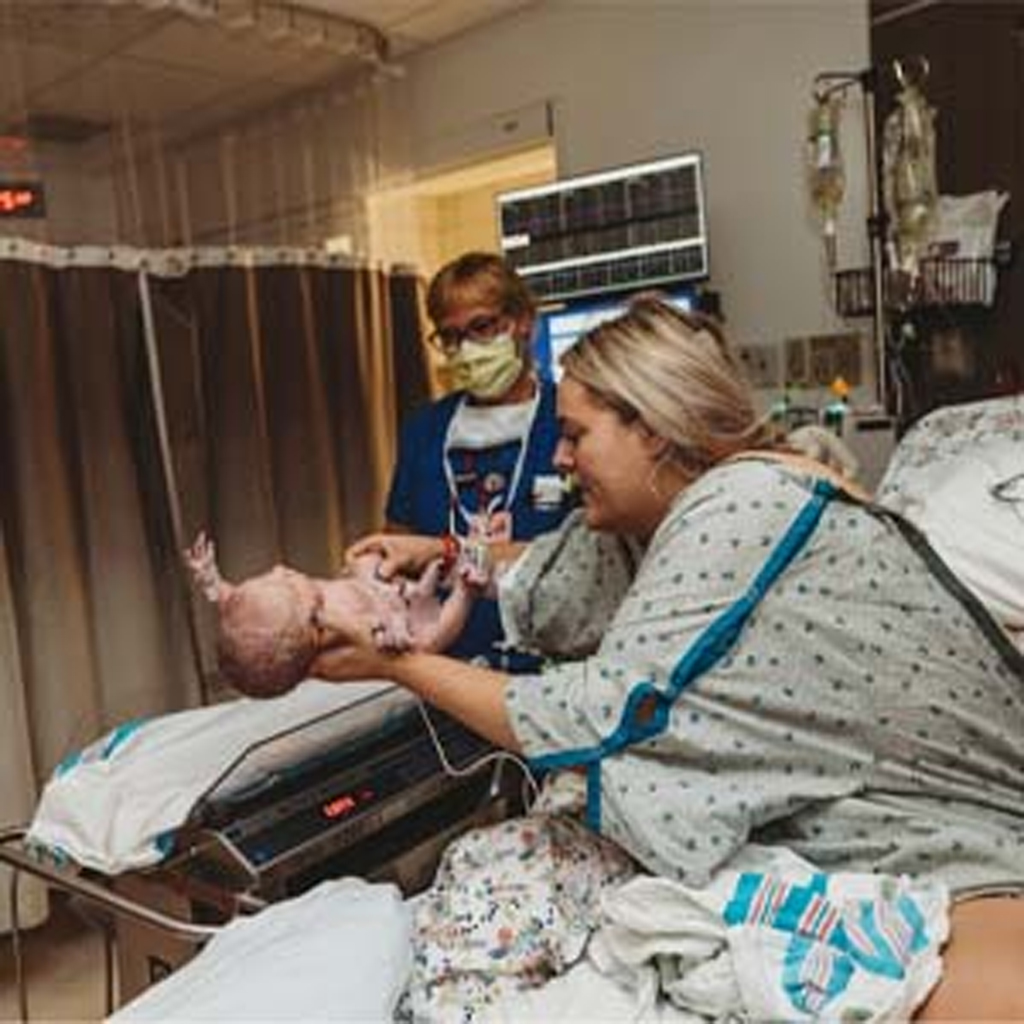 The images have already been shared over 14,000 times and gotten over 18,000 likes, but Mooney had no idea her tale would reach so many people. She said she wanted to share the photographs because she felt the narrative was “very fascinating.” She writes, “I simply wanted to brag on how great this parent was and was so glad she allowed me to post her photographs.” “I had no clue how big it was going to get.” So far, she adds, the reaction to the photographs has been “very good.” “The response has been very positive and joyful, with many other nurses and healthcare workers thinking this concept is fantastic and wanting to do it themselves when they have a 𝑏𝑎𝑏𝑦,” she says. 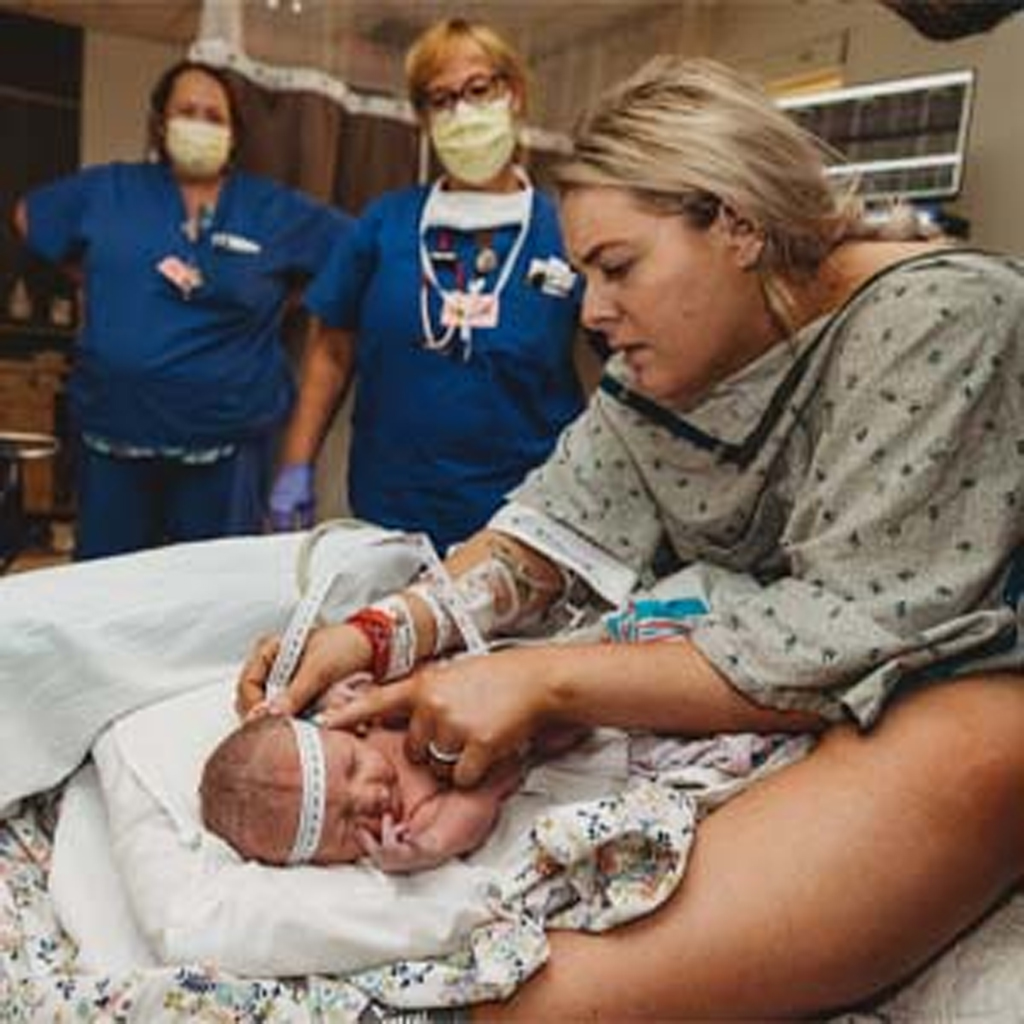 “And I believe it has sparked some conversations as well, because it demonstrates that mom can be involved in her 𝑏𝑎𝑏𝑦’s new𝐛𝐨𝐫𝐧 exam and that it doesn’t always have to take place away from mom in a warmer or elsewhere, but can be done right at the bedside – which I think is huge, especially in a hospital setting.” Mooney feels that people responded to an event that was largely uplifting after more than a year of misery. She says, “We hear so much gloomy and dark stuff about hospitals and C.O.V.I.D and other things.” “I also thought this was a nice uplifting hospital tale that was beneficial for these times and had nothing to do with C.O.V.I.D.” 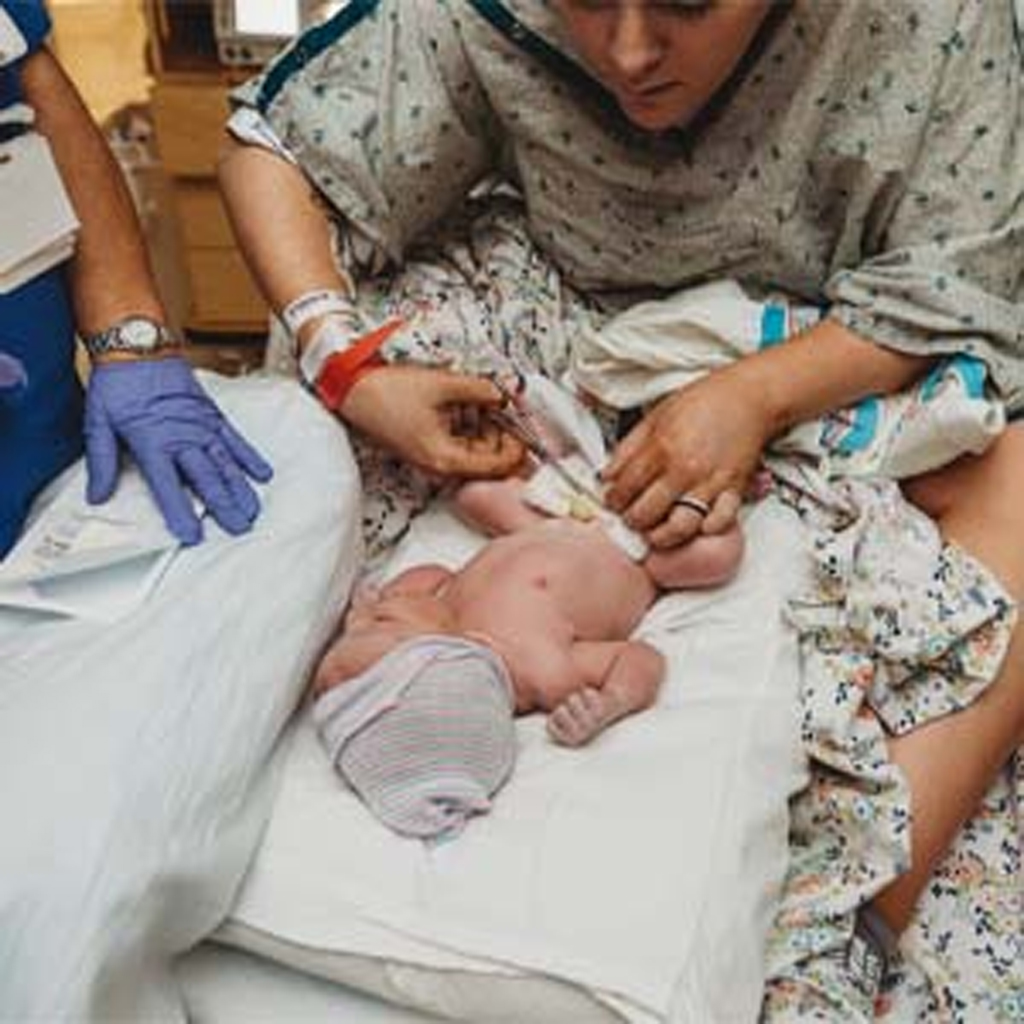 Mooney was relieved to be in the room for something genuinely remarkable at the end. “It was definitely a joy to be welcomed inside this delivery place and given the honor of photographing mother looking out her beautiful new little son,” she wrote on Facebook. 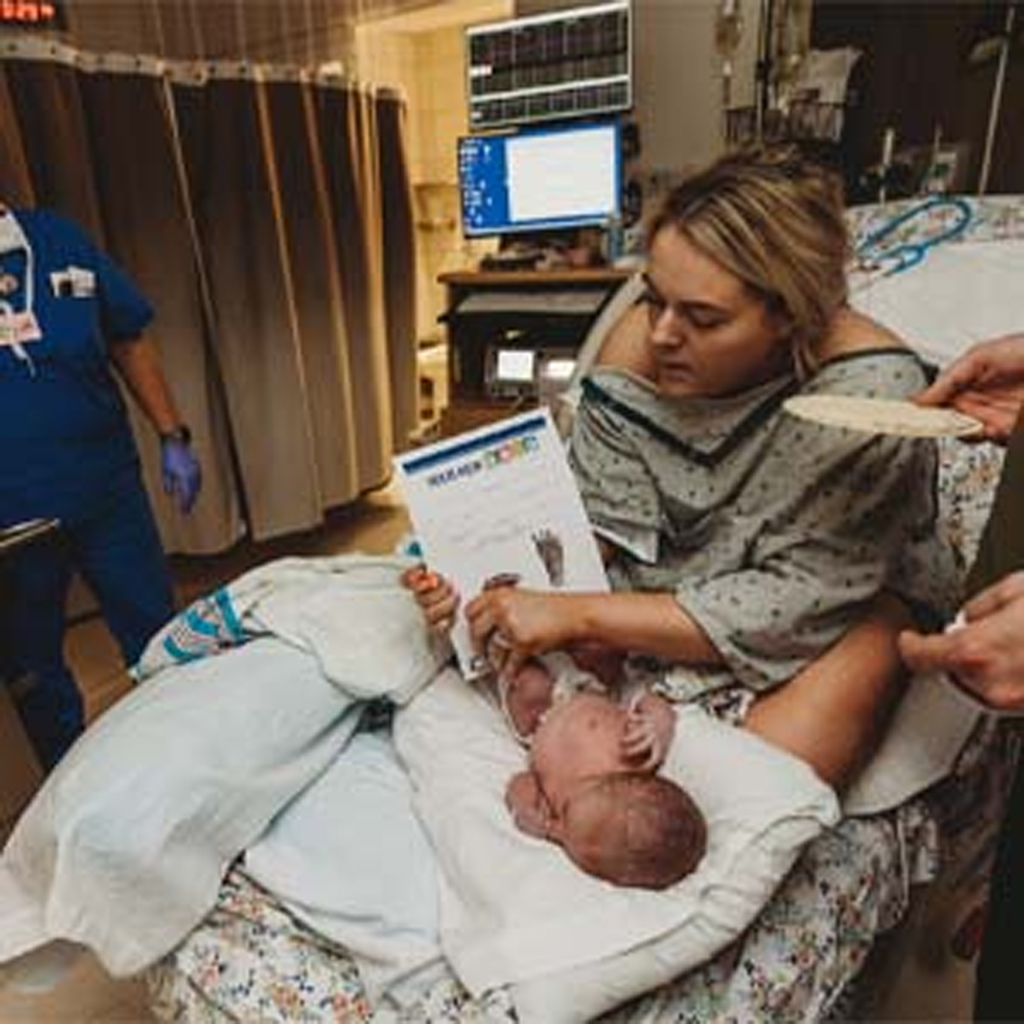